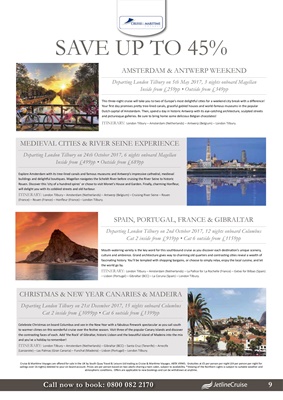 A multiple holiday experience awaits on the doorstep of the UK and can be reached either without flying or with just a two-three hour low cost flight.

shoulders with the rich and famous. It's all here in the Mediterranean waiting to be experienced on a single cruise!

In the cruising world we usually divide the Mediterranean

into either the Western or Eastern areas. The main point of

division is to the west or east of Italy.

Western Mediterranean cruises are more prolific as they

can easily be reached within a two week return cruise from

Southampton without having to fly. Plus there are more

to start from Venice, Piraeus (for Athens), Civitavecchia

(For Rome) and until recently Istanbul in Turkey. You will

feature both parts of the Med such as cruise between

The many varied ports of call in the Mediterranean offer

a diverse range of experiences - many of which are not

and gastronomic pursuits. As a result the Mediterranean

cruise season operates throughout the year.

The following ports of call tend to be the most sought after:

CORSICA AND SARDINIA: unusual ports of call for

scenery, beaches, food and a slower pace of life which are

harder and more expensive to visit on a land

GIBRALTAR: a British Overseas Territory - famous for the

views from the Rock of Gibraltar overlooking the gateway

to the Mediterranean and its monkeys!

MONTE CARLO: for royalty, the Grand Prix, casinos and

CANNES & NICE: for the film festival, glitz and glamour.

PORTOFINO: for spectacular scenery and cuisine.

LIVORNO: for the historical & cultural delights of

BARCELONA: The airport is situated south along

the coast from central Barcelona. The city centre can be

reached in 25-30 minutes depending on traffic - taxis cost

approx 25-30 Euros. The best place to stay is Las Ramblas

which is a 1.2 Km pedestrian avenue full of shops, bars and

restaurants. At the end of Las Ramblas is the monument

to Christopher Columbus which marks the entrance to the

port. The nearest cruise terminal is about 10 minutes walk

from here & there are seven cruise terminals in total. In fact

the Blue Bus Shuttle departs from this monument and can

take you directly to your ship for just 6 Euros. Sightseeing

commenced in 1882 and has not finished), Barcelona FC

Museum, the Picasso Museum and the Magic Fountain of

ROME: The main airport of Fiumicino is situated approx

16 miles from Rome City centre. The best place to stay

main attractions either on foot or on the Metro. Whilst in

Rome you must visit the Coliseum, The Roman Forum ruins

(which are the old heart of the Roman Empire), the Trevi

Fountain, the Pantheon, the Spanish Steps and the Vatican.

and (unlike many cruise specialists) we usually include

these in the cost of your cruise holiday.

just 6km from Genoa city centre passing the port on the

way. It is also the closest airport to the port of Savona -

56km away. Genoa is steeped in history, has lots of low

price cruises departing from here and is the gateway to

the Italian Riviera including Portofino - just 15 miles away.

Genoa is a dense and fascinating medieval warren of

in history - Genoa has always been a city of merchants

for position with boutiques, design outlets and goldsmiths.

its celebrated architecture and lots of things to do. Nightlife

can be found along the waterfront, there are also two

theatres, an opera house and even the Britannia Pub.

VENICE: The sail away from Venice through the

Grand Canal, past St Marks Square and out to sea is one of

the best in world. You can reach Venice by land using the

to Piazzale Roma. The journey takes about 30-40 minutes

depending on traffic . Alternatively you may want to arrive

Marks Square or to the lobbies of larger hotels with landing

pontoons. The cost for an airport water taxi is approx' £90

and the journey takes around 30 minutes. In many of our

SANTORINI: for the photographers paradise or

whitewashed Thira perched on the edge of the Caldera and

the legend of the lost city of Atlantis.

CRETE: the southernmost and largest of the Greek Islands

where the capital of Heraklion is gateway to Palace of

Knossos ( of Minotaur and Labyrinth fame) and the Minoan

civilisation from 4000 years BC.

CORFU: in the Ionian Islands - the birth place of Prince

Philip, the Achilleon Palace (home to the statue of Achilles

RHODES: part of the Dodecanese islands where the

Colossus is once said to have stood straddling Mandraki

Harbour and the ancient walled city was the last bastion of

MYKONOS: part of the Cyclades chain of Islands famed for

Island - popular choices tend to be Saint Marks Square, the

station. Many unscrupulous operators will include a hotel

stay in Venice and further investigation reveals they have

included hotels in Mestre -Venice which is on the mainland

three miles away from Venice Island- so beware!

The restaurants and bars lining Saint Marks Square are the

most expensive; but whilst in Venice you must at least have

a drink here to watch the world go by. Restaurants close

to the Rialto Bridge are much cheaper and just as scenic.

lust through the cobbled streets and by the canals is what

Venice is all about.

Choose a Mediterranean cruise for a

home. They offer an inspiring holiday

experience at amazing low prices and are

perfect for singles, couples and families