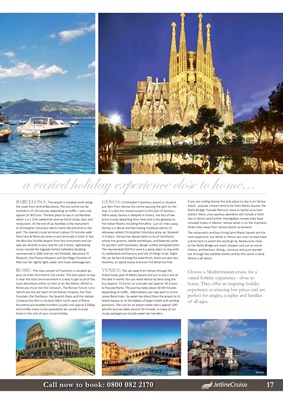 After a thaw in relations between Cuba and the USA - this

to end the embargo the USA have imposed on this country. For

decades Cuba has been excluded from any commerce with the

USA and any cruise itineraries departing from US ports- hence

the reason why time has stood still. It goes without saying that

when the embargo is finally lifted Cuba will be swamped by

tourist, ships and development which will have an impact on its

From the comfort of a modern cruise ship - enjoy all Havana

and Cuba have to offer. Admire the Spanish colonial architecture

of 16th-century Old Havana core, including the maritime

museum in Castillo de la Real fort and the pre-revolutionary

Hamel. Salsa emanates from clubs, cabaret is still performed at

the famed Tropicana and the heady smell of the world famous

Cuban cigars hangs in the air.

in the West Indies.. It served for centuries as a base for

pirates with buried treasure regularly found around the

white sand beaches and gives the chance to get off the

Fly from London to Havana. Transfer to the ship and spend

centre of Havana to explore all this city and unspoilt country

Cayman) - Cozumel (Mexico)-Havana ( for overnight and a full

CUBA AND THE CARIBBEAN

✥ 14 Night full board cruise aboard the

still in the 1950's. Following the success of their winter 2016/17 programme of Caribbean cruises from Havana on Board

MSC Armonia; MSC Cruises are continuing these sell-out cruises on the sister ship - MSC Opera throughout the summer

months. MSC seem to have cornered the market in finding itineraries that are a little different to the norm - which make

them highly sought after by novice and seasoned cruisers alike. Contrast the popular ports of West Caribbean such as

Extras: Regional flight supplements. Excursions at each port of call.

Gratuities on board ship. **Cuban re-entry visas are available on board

amazing holiday with a 15 night round trip cruise to the Hawaiian Islands. Or take advantage of our amazing Las Vegas, Los

Angeles and Hawaii offer onboard the Star Princess. With prices as low as £1699pp, there is no reason not to book!

Hawaii Five O, frantically canoeing though the surf; whilst 60

something's may think of Elvis in his films Blue Hawaii and