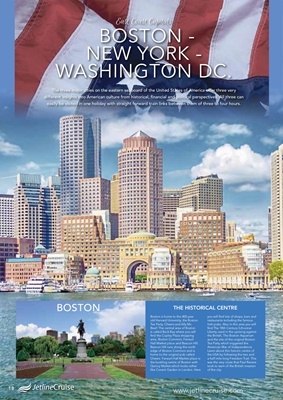 different insights into American culture from historical, financial and political perspectives. All three can

easily be visited in one holiday with straight forward train links between them of three to four hours.

Boston is home to the 400 year

Beal! The central area of Boston

is called Back Bay where you will

Beacon Hill runs along the north

edge of Boston Common and is

home to the original pub called

the bustling centre of Boston with

Quincy Market which looks rather

you will find lots of shops, bars and

restaurants including the famous

Irish pubs. Also in this area you will

Liberty used in the uprising against

the British, The Boston Aquarium

and the site of the original Boston

Tea Party which triggered the

Learn about this historic centre of

the USA by following the two and

a half mile long Freedom Trail. This

was the very route that Paul Revere

took to warn of the British invasion