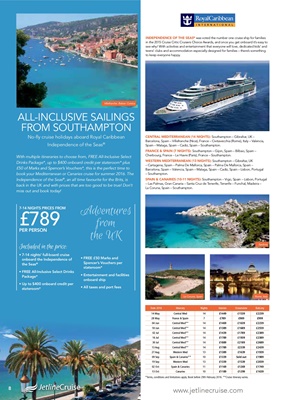 Independence of the Seas®

With multiple itineraries to choose from, FREE All-Inclusive Select

Drinks Package*, up to $400 onboard credit per stateroom* plus

£50 of Marks and Spencer's Vouchers*, this is the perfect time to

book your Mediterranean or Canaries cruise for summer 2016. The

Independence of the Seas®, an all time favourite for the Brits, is

back in the UK and with prices that are too good to be true! Don't

miss out and book today!

onboard the Independence of

in the 2015 Cruise Critic Cruisers Choice Awards, and once you get onboard it's easy to

see why! With activities and entertainment that everyone will love, dedicated kids' and

teens' clubs and accommodation especially designed for families - there's something

to keep everyone happy.