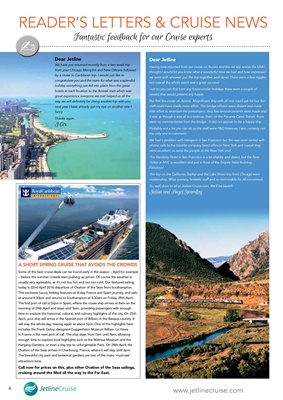 We have just returned recently from a two week trip

from your Chicago Memphis and New Orleans followed

by a cruise to Caribbean trip. I would just like to

congratulate you and the team for what was a splendid

holiday everything just fell into place from the great

hotels at each location to the Amtrak train which was

great experience everyone we met helped us all the

way we will definitely be doing another trip with you

A SHORT SPRING CRUISE THAT AVOIDS THE CROWDS

- before the summer crowds start pushing up prices. Of course the weather is

usually very agreeable, as it's not too hot and not too cold. Our featured sailing

today is 22nd April 2016 departure of Ovation of the Seas from Southampton.

This exclusive luxury holiday features an 8-day France and Spain journey, and sails

The first port of call is Gijon in Spain, where the cruise ship arrives at 8am on the

morning of 24th April and stays until 5pm, providing passengers with enough

time to explore the historical, cultural, and culinary highlights of the city. On 25th

April, your ship will arrive in the Spanish port of Bilbao, in the Basque country. It

will stay the whole day, leaving again at about 5pm. One of the highlights here

in France is the next port of call. The ship stays from 7am until 9pm, allowing

Hanging Gardens, or even a day trip to unforgettable Paris. On 28th April, the

Ovation of the Seas arrives in Cherbourg, France, where it will stay until 6pm.

Call now for prices on this, plus other Ovation of the Seas sailings,

cruising around the Med all the way to the Far East.

we were with whoever put the trip together, well done! There were a few niggles

but overall the whole event was a great success!

tweaks that would prevent any hassle.

But first the cruise on Aurora. Magnificent ship with all one could ask for but the

staff could have made more effort. The bridge officers were distant and made

little effort to entertain the passengers. Very few announcements were made and

it was as though it was all too tedious. Even on the Panama Canal Transit, there

were no commentaries from the bridge. It did not appear to be a happy ship.

Probably not a lot you can do as the staff were P&O however, I was certainly not

were excellent, as were the people at the New York end.

The Handelry Hotel in San Francisco is a bit shabby and dated, but the New

Yorker in NYC is excellent and just in front of the Empire State Building.

outstanding. What scenery, fantastic staff and so memorable for all concerned.

So, well done to all at Jetline cruise.com. We'll be back!!!