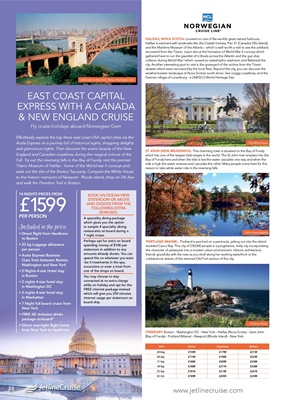 HALIFAX, NOVA SCOTIA: Located on one of the world's great natural harbours,

Halifax is adorned with landmarks like the Citadel fortress, Pier 21 (Canada's Ellis Island),

recovered from the Titanic. Learn about the formation of World War II convoys which

city. Another interesting spot to visit is the graveyard of the victims from the Titanic

disaster which were recovered by the local fleet. Beyond the city, you can discover the

EXPRESS WITH A CANADA

and glamorous nights. Then discover the scenic beauty of the New

England and Canadian coastlines during the magical colours of the

Fall. Try out the reversing falls in the Bay of Fundy, visit the premier

seek out the site of the Boston Tea party. Compare the White House

to the historic mansions of Newport - Rhode Island, shop on 5th Ave

and walk the Freedom Trail in Boston.

• 7 Night full board cruise from

from New York to Heathrow.

ST JOHN (NEW BRUNSWICK). This charming town is situated on the Bay of Fundy

which has one of the largest tidal ranges in the world. The St John river empties into the

tide is high the water reverses and cascades the other. Many people come here for this

reason to take white water ride in the reversing falls.

PORTLAND (MAINE) . Portland is perched on a peninsula, jutting out into the islandstudded Casco Bay.

This city of 230,000 people is a progressive, lively city incorporating

the character of yesteryear into a modern urban environment. Historic architecture

cobblestone streets of the restored Old Port section of the city.

AND CHOOSE FROM THE

which gives you the option

restaurants on board during a

Perhaps opt for extra on board

stateroom in addition to any

amounts already shown. You can

spend this on whatever you want

-be it treatments in the spa,

excursions or even a treat from

one of the shops on board.

You may choose to stay

connected at no extra charge

while on holiday and opt for the

which will give you 250 minutes

internet usage per stateroom on