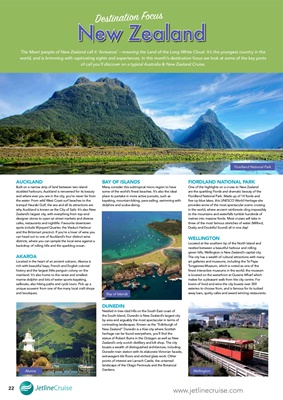 Built on a narrow strip of land between two islandstudded harbours; Auckland is renowned

and where ever you are in the city, you're never far from

the water. From wild West Coast surf beaches to the

tranquil Hauraki Gulf, the sea and all its attractions are

why Auckland is known as the City of Sails. It's also New

Zealand's largest city, with everything from top-end

and the Britomart precinct. If you're a lover of wine you

can head out to one of Auckland's four distinct wine

districts, where you can sample the local wine against a

backdrop of rolling hills and the sparkling ocean.

Located in the heart of an ancient volcano, Akaroa is

history and the largest little penguin colony on the

mainland. It's also home to the rarest and smallest

sailboats, also hiking paths and cycle tours. Pick up a

unique souvenir from one of the many local craft shops

Many consider this subtropical micro-region to have

some of the world's finest beaches. It's also the ideal

place to partake in more active pursuits, such as

Nestled in tree-clad hills on the South East coast of

by area and arguably the most spectacular in terms of

contrasting landscapes. Known as the "Edinburgh of

New Zealand" Dunedin is a Kiwi city where Scottish

heritage can be found everywhere, you'll find the

statue of Robert Burns in the Octagon as well as New

Zealand's only scotch distillery and kilt shop. The city

boasts a wealth of distinguished architecture, including

points of interest are Larnach Castle, the untamed

landscape of the Otago Peninsula and the Botanical

One of the highlights on a cruise to New Zealand

are the sparkling Fiords and dramatic beauty of the

Fiordland National Park. Made up of 14 fiords and

provides some of the most spectacular scenic cruising

in the world, where ancient rainforests cling impossibly

to the mountains and waterfalls tumble hundreds of

metres into massive fiords. Most cruises will take in

three of the most famous stretches of water (Milford,

Dusky and Doubtful Sound) all in one day!

Located at the southern tip of the North Island and

nestled between a beautiful harbour and rolling

The city has a wealth of cultural attractions with many

art galleries and museums, including the Te Papa

Tongarewa Museum, which is noted as one of the

finest interactive museums in the world; the museum

is located on the waterfront at Queens Wharf which

makes for a pleasant walk from the city centre. For

lovers of food and wine the city boasts over 300

eateries to choose from, and is famous for its tucked

The Maori people of New Zealand call it 'Aotearoa' - meaning the Land of the Long White Cloud. It's the youngest country in the

world, and is brimming with captivating sights and experiences. In this month's destination focus we look at some of the key ports