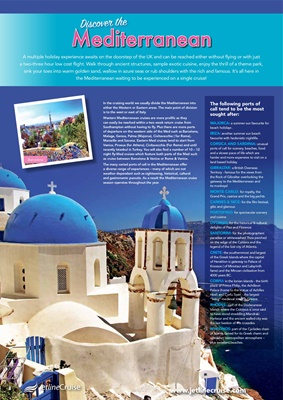 sink your toes into warm golden sand, wallow in azure seas or rub shoulders with the rich and famous. It's all here in

the Mediterranean waiting to be experienced on a single cruise!

In the cruising world we usually divide the Mediterranean into

either the Western or Eastern areas. The main point of division

is to the west or east of Italy.

Western Mediterranean cruises are more prolific as they

can easily be reached within a two week return cruise from

Southampton without having to fly. Plus there are more ports

of departure on the western side of the Med such as Barcelona,

Marseille and Savona. Eastern Med cruises tend to start from

Venice, Piraeus (for Athens), Civitavecchia (For Rome) and until

recently Istanbul in Turkey. You will also find a number of 10 - 12

as cruise between Barcelona & Venice or Rome & Venice.

The many varied ports of call in the Mediterranean offer

a diverse range of experiences - many of which are not

and gastronomic pursuits. As a result the Mediterranean cruise

season operates throughout the year.

The following ports of

call tend to be the most

MAJORCA: a summer sun favourite for

and a slower pace of life which are

harder and more expensive to visit on a

Territory - famous for the views from

the Rock of Gibraltar overlooking the

gateway to the Mediterranean and

MONTE CARLO: for royalty, the

CANNES & NICE: for the film festival,

LIVORNO: for the historical & cultural

delights of Pisa and Florence.

SANTORINI: for the photographers

on the edge of the Caldera and the

legend of the lost city of Atlantis.

CRETE: the southernmost and largest

of the Greek Islands where the capital

of Heraklion is gateway to Palace of

Knossos ( of Minotaur and Labyrinth

fame) and the Minoan civilisation from

CORFU: in the Ionian Islands - the birth

place of Prince Philip, the Achilleon

Palace (home to the statue of Achilles

Heel) and Corfu Town - the largest

RHODES: part of the Dodecanese

islands where the Colossus is once said

to have stood straddling Mandraki

Harbour and the ancient walled city was

the last bastion of the crusades.

MYKONOS: part of the Cyclades chain

of Islands famed for its Greek charm and