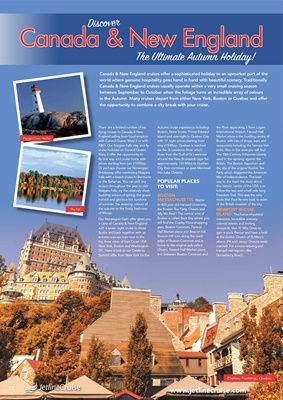 in the Autumn. Many cruises depart from either New York, Boston or Quebec and offer

the opportunity to combine a city break with your cruise.

There are a limited number of no

with Cunard Queen Mary 2 or with

Mary 2 offer the opportunity to

fly one way and cruise home with

Or perhaps choose our Norwegian

Falls with a beach cruise to Bermuda

or the Bahamas. You can pick any

season throughout the year to visit

budding season of spring, the grape

of summer, the amazing colours of

the autumn or the frosty freshness

Our Norwegian Gem offer gives you

a taste of Canada & New England

with a seven night cruise to Nova

Scotia and back together with an

autumn express train tour to the

DC. Have a look at our Celebrity

Summit offer from New York for the

Island and overnight in Quebec City

with 17 night prices starting from

via the St Lawrence River which

flows from the Gulf of St Lawrence

around the New Brunswick cape for

City then continues on past Montreal

the Boston Tea Party, Cheers and

Boston is called Back Bay where you

will find the Copley Plaza shopping

Beacon Hill runs along the north

edge of Boston Common and is

home to the original pub called

is in between Boston Common and

the River separating it from Logan

Market place is the bustling centre of

Boston with lots of shops, bars and

restaurants including the famous Irish

pubs. Also in this area you will find

used in the uprising against the

British, The Boston Aquarium and

the site of the original Boston Tea

Party which triggered the American

War of Independence. The best

way to the learn the most about

this historic centre of the USA is to

Freedom Trail. This was the very

of the British invasion of the city.

ISLAND: The home of palatial

gain a quick flavour and have a look

at the Gothic Church of St Mary's

where JFK and Jacqui Onassis were

married. For a more relaxing and