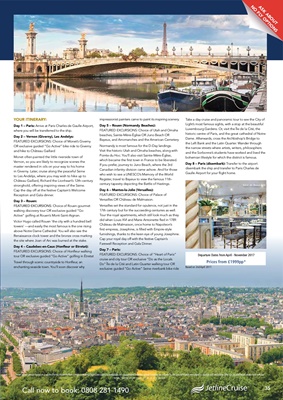 Prices are per person based on 2 adults sharing departing from London - regional flights are subject to availability at a supplement. Overseas airport transfers are included in the cost. Itineraries are subject to change and availability. Offer can be withdrawn at any time without

notice. *Savings are per couple and are an up to amount.

where you will be transferred to the ship.

and hike to Château Gaillard

Vernon, so you are likely to recognize scenes the

master rendered in oils on your way to his home

in Giverny. Later, cruise along the peaceful Seine

to Les Andelys, where you may wish to hike up to

Cap the day off at the festive Captain's Welcome

Victor Hugo called Rouen 'the city with a hundred bell

towers' -and easily the most famous is the one rising

above Notre Dame Cathedral. You will also see the

the site where Joan of Arc was burned at the stake.

Travel through scenic countryside to Honfleur, an

beaches, Sainte-Mère-Église OR Juno Beach OR

Bayeux, and Arromanches and the American Cemetery

Normandy is most famous for the D-Day landings.

Visit the historic Utah and Omaha beaches, along with

which became the first town in France to be liberated.

If you prefer, journey to Juno Beach, where the 3rd

Canadian infantry division came ashore. And for those

who wish to see a UNESCO's Memory of the World

Register, travel to Bayeux to view the famous 11thcentury tapestry depicting the Battle of Hastings.

FEATURED EXCURSIONS: Choice of Palace of

Versailles set the standard for opulence, not just in the

17th century but for the succeeding centuries as well.

Tour the royal apartments, which still look much as they

did when Louis XVI and Marie Antoinette fled in 1789.

furnishings, thanks to the keen eye of young Josephine.

Cap your royal day off with the festive Captain's

cruise and city tour OR exclusive "Do as the Locals

Light's most famous sights, with a stop at the beautiful

Luxembourg Gardens. Or, visit the Île de la Cité, the

historic centre of Paris, and the great cathedral of Notre

the Left Bank and the Latin Quarter. Wander through

and the Sorbonne's students have worked and lived the

bohemian lifestyle for which the district is famous.

disembark the ship and transfer to Paris Charles de

Gaulle Airport for your flight home.