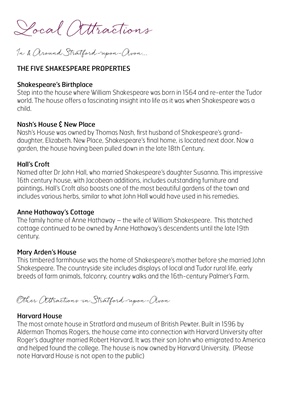 world. The house offers a fascinating insight into life as it was when Shakespeare was a

garden, the house having been pulled down in the late 18th Century.

paintings. Hall's Croft also boasts one of the most beautiful gardens of the town and

includes various herbs, similar to what John Hall would have used in his remedies.

The family home of Anne Hathaway - the wife of William Shakespeare. This thatched

Other Attractions in Stratford-upon-Avon

The most ornate house in Stratford and museum of British Pewter. Built in 1596 by

Alderman Thomas Rogers, the house came into connection with Harvard University after

Roger's daughter married Robert Harvard. It was their son John who emigrated to America

and helped found the college. The house is now owned by Harvard University. (Please

note Harvard House is not open to the public)