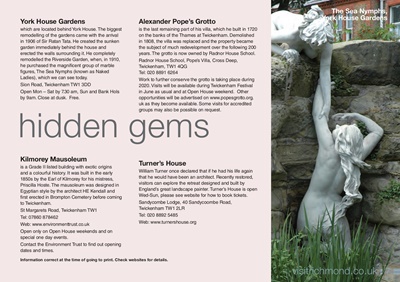 which are located behind York House. The biggest

remodelling of the gardens came with the arrival

in 1906 of Sir Ratan Tata. He created the sunken

garden immediately behind the house and

erected the walls surrounding it. He completely

remodelled the Riverside Garden, when, in 1910,

he purchased the magnificent group of marble

Ladies), which we can see today.

is a Grade II listed building with exotic origins

and a colourful history. It was built in the early

1850s by the Earl of Kilmorey for his mistress,

Priscilla Hoste. The mausoleum was designed in

Egyptian style by the architect HE Kendall and

Open only on Open House weekends and on

Information correct at the time of going to print. Check websites for details.

is the last remaining part of his villa, which he built in 1720

on the banks of the Thames at Twickenham. Demolished

in 1808, the villa was replaced and the property became

the subject of much redevelopment over the following 200

years. The grotto is now owned by Radnor House School.

Work to further conserve the grotto is taking place during

2020. Visits will be available during Twickenham Festival

in June as usual and at Open House weekend.  Other

opportunities will be advertised on www.popesgrotto.org.

uk as they become available. Some visits for accredited

groups may also be possible on request.

William Turner once declared that if he had his life again

that he would have been an architect. Recently restored,

visitors can explore the retreat designed and built by

Wed-Sun, please see website for how to book tickets.