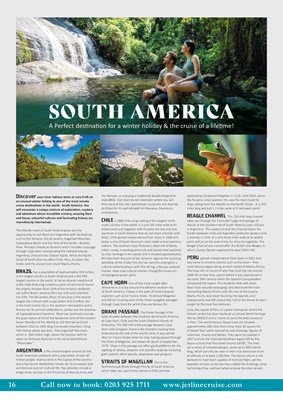 16Discover your inner Indiana Jones or Lara Croft on

an unusual winter holiday to one of the most remote

cruise destinations in the world - South America. You

will encounter a unique mixture of exploration, mystery

and fauna, colourful cultures and fascinating history are

The Atlantic coast of South America gives you the

opportunity to visit Brazil and Argentina with key features

such as the Amazon, Rio de Janeiro, Sugarloaf Mountain,

Copacabana Beach and the Paris of the South - Buenos

Aires. Perhaps choose an itinerary which includes a passage

Argentina, Chile and the Chilean Fjords. While the Pacific

Andes and the ancient lost city of Machu Picchu.

BRAZIL has a population of approximately 200 million,

is the largest country in South America and is the fifth

largest country in the world. It has an Atlantic coastline of

4,655 miles featuring numerous ports of call and of course

the mighty Amazon River. 60% of the Amazon rainforest

sits within Brazil, whereas Peru has 13% and Colombia

has 10%. Rio De Janeiro (River of January) is the second

largest city in Brazil with a population of 6.3 million. Rio

is the most visited city in the southern hemisphere and is

famous for its carnival celebrations, samba and the beaches

of Copacabana and Ipanema. Must see landmarks include

the giant statue of Christ the Redeemer (one of the modern

Seven Wonders of the World) at 130 feet tall and built

which is 396 meters high, above the harbour with its

ARGENTINA Is the second largest country on the

South American continent with a population of over 40

million people. Buenos Aires is the Capital of the country

and a top tourist destination, known for its European style

architecture and rich cultural life. Top activities include a

tango show, ranches in the Provinces of Buenos Aires and

the Pampas, or enjoying a traditional Aasado (Argentine

style BBQ). Visit Avenida del Libertador where you will

find many of the city's best-known museums and Avenida

CHILE is 2880 miles long making it the longest northsouth country

widest point and together with Ecuador are the only two

countries in South America that do not share a border with

Brazil. Chile gained independence from Spain in 1818 and

today is one of South America's most stable and prosperous

nations. The southern coast features a labyrinth of fjords,

by ship. Santiago is the capital and is situated approximately

80 miles from the port of San Antonio. Against the stunning

backdrop of the Andes this city has recently undergone a

CAPE HORN One of the most sought-after

itineraries is a cruise around the extreme southern tip

of South America. Follow in the path of historical great

and Darwin cruising each of the three navigable passages

through Cape Horn for which they are famous for.

DRAKE PASSAGE The Drake Passage is the

body of water between the southern tip of South America

at Cape Horn, Chile and the South Shetland Islands of

Horn and Livingston Island is the shortest crossing from

Antarctica to the rest of the world's land. It was named

after Sir Francis Drake when his ship, having passed through

the Strait of Magellan, was blown far South in September

1578. Ships in the passage are often good platforms for the

sighting of whales, dolphins and plentiful seabirds including

STRAITS OF MAGELLAN This is the

Northernmost Route through the tip of South America

which takes you past Punta Arenas in Chile and was

the Panama Canal opened, this was the main route for

ships sailing from the Atlantic to the Pacific Ocean. It is 350

miles long and just 1.2 miles wide at it narrowest point.

takes you through the Tierra del Fuego Archipelago of

islands at the southern tip of South America, past Ushuaia

in Argentina. The eastern end of the Channel forms the

border between Chile and Argentina whilst the western end

is entirely in Chile. It is only three miles wide at its widest

point and so can be quite tricky for ships to negotiate. The

Beagle Channel was named after the British ship Beagle, in

PERU gained independence from Spain in 1821 and

was home to ancient cultures such as the Incas - their

most famous legacy being ancient citadel of Machu Picchu.

the early 16th century when the Spanish Conquistadors

conquered the region. The residents took with them

their most valuable belongings and destroyed the trails

connecting Machu Picchu with the rest of the empire.

Machu Picchu was never found by the Spanish, and

subsequently was left untouched, lost to the dense Amazon

Jungle for the next five centuries.

Lima, the capital of Peru, is a great metropolis where the

historic centre has been declared a Cultural World Heritage

Site by UNESCO and is home to some the best museums

in Peru. The world-famous Nazca Lines are situated

of desert floor were covered by vast drawings, figures of

mammals, insects and deities. They were discovered in

1927 and are the most extraordinary legacy left by the

Nazca culture that flourished around 300 BC. The lines

are a series of complex designs, some up to 300 metres

long, which can only be seen in their true dimension from

an altitude of at least 1,500 feet. The Nazca culture is not

believed to have been capable of manned flight, yet the

question remains as to how they crafted the drawings, what

technology they used and what purpose the lines served.

A Perfect destination for a winter holiday & the cruise of a lifetime!