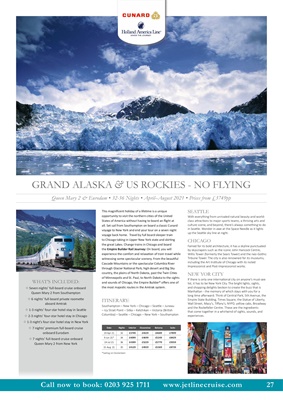 This magnificent holiday of a lifetime is a unique

opportunity to visit the northern cities of the United

States of America without having to board an flight at

all. Set sail from Southampton on board a classic Cunard

voyage back home. Travel by full board sleeper train

to Chicago taking in Upper New York state and skirting

the great Lakes. Change trains in Chicago and board

the Empire Builder Rail Journey: On board, you will

experience the comfort and relaxation of train travel while

witnessing some spectacular scenery. From the beautiful

country, the plains of North Dakota, past the Twin Cities

of Minneapolis and St. Paul, to North Dakota to the sights

and sounds of Chicago, the Empire Builder® offers one of

the most majestic routes in the Amtrak system.

GRAND ALASKA & US ROCKIES - NO FLYING

With everything from unrivaled natural beauty and worldclass attractions

to major sports teams, a thriving arts and

culture scene, and beyond, there's always something to do

in Seattle. Wonder in awe at the Space Needle as it lights

up the Seattle sky line at night.

Famed for its bold architecture, it has a skyline punctuated

by skyscrapers such as the iconic John Hancock Centre,

Willis Tower (formerly the Sears Tower) and the neo-Gothic

Tribune Tower. The city is also renowned for its museums,

including the Art Institute of Chicago with its noted

If there is only one international city on anyone's must-see

list, it has to be New York City. The bright lights, sights,

and shopping delights beckon to create the buzz that is

Manhattan - the memory of which stays with you for a

and the Rockefeller Centre. These are the ingredients

that come together in a whirlwind of sights, sounds, and