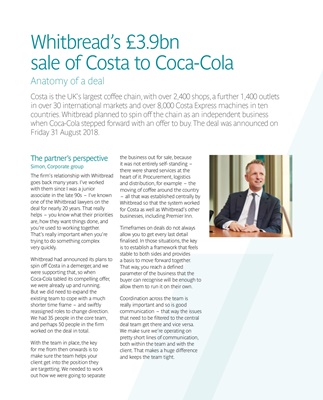 sale of Costa to Coca-Cola

The firm's relationship with Whitbread

goes back many years. I've worked

with them since I was a junior

one of the Whitbread lawyers on the

deal for nearly 20 years. That really

helps - you know what their priorities

are, how they want things done, and

you're used to working together.

That's really important when you're

trying to do something complex

Whitbread had announced its plans to

spin off Costa in a demerger, and we

were supporting that, so when

we were already up and running.

But we did need to expand the

existing team to cope with a much

We had 35 people in the core team,

and perhaps 50 people in the firm

worked on the deal in total.

With the team in place, the key

for me from then onwards is to

make sure the team helps your

client get into the position they

are targetting. We needed to work

out how we were going to separate

in over 30 international markets and over 8,000 Costa Express machines in ten

countries. Whitbread planned to spin off the chain as an independent business

when Coca-Cola stepped forward with an offer to buy. The deal was announced on

Anatomy of a deal

the business out for sale, because

it was not entirely self- standing -

there were shared services at the

heart of it. Procurement, logistics

and distribution, for example - the

moving of coffee around the country

- all that was established centrally by

Whitbread so that the system worked

for Costa as well as Whitbread's other

Timeframes on deals do not always

allow you to get every last detail

finalised. In those situations, the key

is to establish a framework that feels

stable to both sides and provides

a basis to move forward together.

That way, you reach a defined

parameter of the business that the

buyer can recognise will be enough to

allow them to run it on their own.

Coordination across the team is

really important and so is good

communication - that way the issues

that need to be filtered to the central

deal team get there and vice versa.

We make sure we're operating on

both within the team and with the

client. That makes a huge difference

and keeps the team tight.