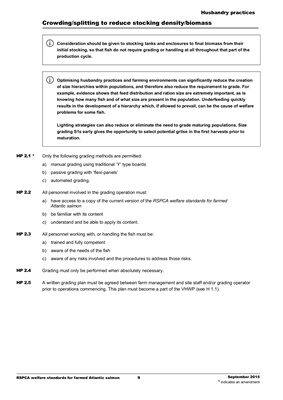 initial stocking, so that fish do not require grading or handling at all throughout that part of the

of size hierarchies within populations, and therefore also reduce the requirement to grade. For

example, evidence shows that feed distribution and ration size are extremely important, as is

knowing how many fish and of what size are present in the population. Underfeeding quickly

results in the development of a hierarchy which, if allowed to prevail, can be the cause of welfare

problems for some fish.

HP 2.1 * Only the following grading methods are permitted:

b) passive grading with 'flexi-panels'

HP 2.2 All personnel involved in the grading operation must:

c) understand and be able to apply its content.

HP 2.3 All personnel working with, or handling the fish must be:

a) trained and fully competent

b) aware of the needs of the fish

c) aware of any risks involved and the procedures to address those risks.

HP 2.4 Grading must only be performed when absolutely necessary.

HP 2.5 A written grading plan must be agreed between farm management and site staff and/or grading operator

prior to operations commencing. This plan must become a part of the VHWP (see H 1.1).