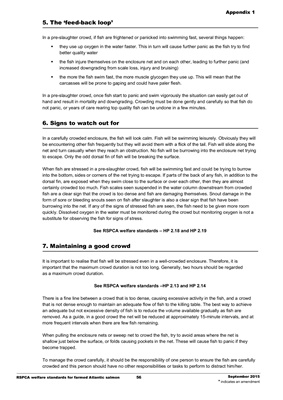 In a pre-slaughter crowd, if fish are frightened or panicked into swimming fast, several things happen:

 they use up oxygen in the water faster. This in turn will cause further panic as the fish try to find

 the fish injure themselves on the enclosure net and on each other, leading to further panic (and

 the more the fish swim fast, the more muscle glycogen they use up. This will mean that the

carcasses will be prone to gaping and could have paler flesh.

In a pre-slaughter crowd, once fish start to panic and swim vigorously the situation can easily get out of

hand and result in mortality and downgrading. Crowding must be done gently and carefully so that fish do

not panic, or years of care rearing top quality fish can be undone in a few minutes.

6. Signs to watch out for

In a carefully crowded enclosure, the fish will look calm. Fish will be swimming leisurely. Obviously they will

be encountering other fish frequently but they will avoid them with a flick of the tail. Fish will slide along the

net and turn casually when they reach an obstruction. No fish will be burrowing into the enclosure net trying

to escape. Only the odd dorsal fin of fish will be breaking the surface.

When fish are stressed in a pre-slaughter crowd, fish will be swimming fast and could be trying to burrow

into the bottom, sides or corners of the net trying to escape. If parts of the back of any fish, in addition to the

dorsal fin, are exposed when they swim close to the surface or over each other, then they are almost

certainly crowded too much. Fish scales seen suspended in the water column downstream from crowded

fish are a clear sign that the crowd is too dense and fish are damaging themselves. Snout damage in the

burrowing into the net. If any of the signs of stressed fish are seen, the fish need to be given more room

quickly. Dissolved oxygen in the water must be monitored during the crowd but monitoring oxygen is not a

substitute for observing the fish for signs of stress.

It is important to realise that fish will be stressed even in a well-crowded enclosure. Therefore, it is

important that the maximum crowd duration is not too long. Generally, two hours should be regarded

as a maximum crowd duration.

There is a fine line between a crowd that is too dense, causing excessive activity in the fish, and a crowd

that is not dense enough to maintain an adequate flow of fish to the killing table. The best way to achieve

removed. As a guide, in a good crowd the net will be reduced at approximately 15-minute intervals, and at

more frequent intervals when there are few fish remaining.

When pulling the enclosure nets or sweep net to crowd the fish, try to avoid areas where the net is

shallow just below the surface, or folds causing pockets in the net. These will cause fish to panic if they

To manage the crowd carefully, it should be the responsibility of one person to ensure the fish are carefully

crowded and this person should have no other responsibilities or tasks to perform to distract him/her.