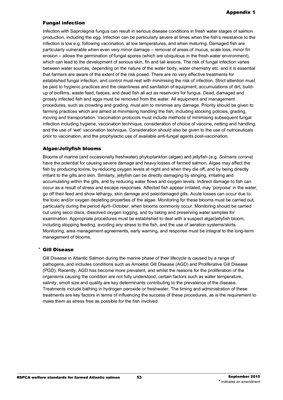 production, including the egg. Infection can be particularly severe at times when the fish's resistance to the

infection is low e.g. following vaccination, at low temperatures, and when maturing. Damaged fish are

erosion - allows the germination of fungal spores (which are ubiquitous in the fresh water environment),

which can lead to the development of serious skin, fin and tail lesions. The risk of fungal infection varies

between water sources, depending on the nature of the water body, water chemistry etc. and it is essential

that farmers are aware of the extent of the risk posed. There are no very effective treatments for

established fungal infection, and control must rest with minimising the risk of infection. Strict attention must

be paid to hygienic practices and the cleanliness and sanitation of equipment; accumulations of dirt, buildup

of biofilms, waste feed, faeces, and dead fish all act as reservoirs for fungus. Dead, damaged and

grossly infected fish and eggs must be removed from the water. All equipment and management

procedures, such as crowding and grading, must aim to minimise any damage. Priority should be given to

farming practices which are aimed at minimising handling the fish, including stocking policies, grading,

moving and transportation. Vaccination protocols must include methods of minimising subsequent fungal

infection including hygiene, vaccination technique, consideration of choice of vaccine, netting and handling,

and the use of 'wet' vaccination technique. Consideration should also be given to the use of nutriceuticals

prior to vaccination, and the prophylactic use of available anti-fungal agents post-vaccination.

have the potential for causing severe damage and heavy losses of farmed salmon. Algae may affect the

fish by producing toxins, by reducing oxygen levels at night and when they die off, and by being directly

irritant to the gills and skin. Similarly, jellyfish can be directly damaging by stinging, irritating and

accumulating within the gills, and by reducing water flows and oxygen levels. Indirect damage to fish can

occur as a result of stress and escape responses. Affected fish appear irritated, may 'porpoise' in the water,

go off their feed and show lethargy, skin damage and pale/damaged gills. Acute losses can occur due to

the toxic and/or oxygen depleting properties of the algae. Monitoring for these blooms must be carried out,

particularly during the period April-October, when blooms commonly occur. Monitoring should be carried

out using secci discs, dissolved oxygen logging, and by taking and preserving water samples for

examination. Appropriate procedures must be established to deal with a suspect algal/jellyfish bloom,

including stopping feeding, avoiding any stress to the fish, and the use of aeration systems/skirts.

Monitoring, area management agreements, early warning, and response must be integral to the long-term

(PGD). Recently, AGD has become more prevalent, and whilst the reasons for the proliferation of the

organisms causing the condition are not fully understood, certain factors such as water temperature,

salinity, smolt size and quality are key determinants contributing to the prevalence of the disease.

Treatments include bathing in hydrogen peroxide or freshwater. The timing and administration of these

treatments are key factors in terms of influencing the success of these procedures, as is the requirement to

make them as stress free as possible for the fish involved.