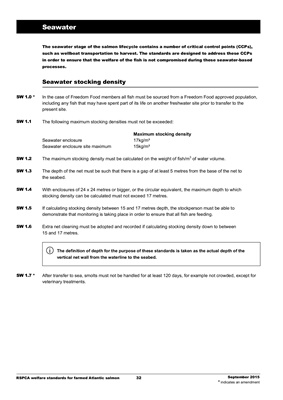 The seawater stage of the salmon lifecycle contains a number of critical control points (CCPs),

such as wellboat transportation to harvest. The standards are designed to address these CCPs

SW 1.0 * In the case of Freedom Food members all fish must be sourced from a Freedom Food approved population,

SW 1.1 The following maximum stocking densities must not be exceeded:

SW 1.2 The maximum stocking density must be calculated on the weight of fish/m

SW 1.3 The depth of the net must be such that there is a gap of at least 5 metres from the base of the net to

SW 1.4 With enclosures of 24 x 24 metres or bigger, or the circular equivalent, the maximum depth to which

stocking density can be calculated must not exceed 17 metres.

SW 1.5 If calculating stocking density between 15 and 17 metres depth, the stockperson must be able to

demonstrate that monitoring is taking place in order to ensure that all fish are feeding.

SW 1.6 Extra net cleaning must be adopted and recorded if calculating stocking density down to between

vertical net wall from the waterline to the seabed.

SW 1.7 * After transfer to sea, smolts must not be handled for at least 120 days, for example not crowded, except for