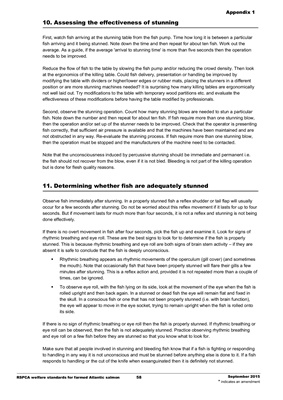 10. Assessing the effectiveness of stunning

First, watch fish arriving at the stunning table from the fish pump. Time how long it is between a particular

fish arriving and it being stunned. Note down the time and then repeat for about ten fish. Work out the

average. As a guide, if the average 'arrival to stunning time' is more than five seconds then the operation

needs to be improved.

Reduce the flow of fish to the table by slowing the fish pump and/or reducing the crowd density. Then look

at the ergonomics of the killing table. Could fish delivery, presentation or handling be improved by

modifying the table with dividers or higher/lower edges or rubber mats, placing the stunners in a different

position or are more stunning machines needed? It is surprising how many killing tables are ergonomically

not well laid out. Try modifications to the table with temporary wood partitions etc. and evaluate the

effectiveness of these modifications before having the table modified by professionals.

Second, observe the stunning operation. Count how many stunning blows are needed to stun a particular

fish. Note down the number and then repeat for about ten fish. If fish require more than one stunning blow,

then the operation and/or set up of the stunner needs to be improved. Check that the operator is presenting

fish correctly, that sufficient air pressure is available and that the machines have been maintained and are

not obstructed in any way. Re-evaluate the stunning process. If fish require more than one stunning blow,

then the operation must be stopped and the manufacturers of the machine need to be contacted.

Note that the unconsciousness induced by percussive stunning should be immediate and permanent i.e.

the fish should not recover from the blow, even if it is not bled. Bleeding is not part of the killing operation

but is done for flesh quality reasons.

11. Determining whether fish are adequately stunned

Observe fish immediately after stunning. In a properly stunned fish a reflex shudder or tail flap will usually

occur for a few seconds after stunning. Do not be worried about this reflex movement if it lasts for up to four

seconds. But if movement lasts for much more than four seconds, it is not a reflex and stunning is not being

If there is no overt movement in fish after four seconds, pick the fish up and examine it. Look for signs of

rhythmic breathing and eye roll. These are the best signs to look for to determine if the fish is properly

stunned. This is because rhythmic breathing and eye roll are both signs of brain stem activity - if they are

absent it is safe to conclude that the fish is deeply unconscious.

the mouth). Note that occasionally fish that have been properly stunned will flare their gills a few

minutes after stunning. This is a reflex action and, provided it is not repeated more than a couple of

times, can be ignored.

 To observe eye roll, with the fish lying on its side, look at the movement of the eye when the fish is

rolled upright and then back again. In a stunned or dead fish the eye will remain flat and fixed in

the skull. In a conscious fish or one that has not been properly stunned (i.e. with brain function),

the eye will appear to move in the eye socket, trying to remain upright when the fish is rolled onto

eye roll can be observed, then the fish is not adequately stunned. Practice observing rhythmic breathing

and eye roll on a few fish before they are stunned so that you know what to look for.

to handling in any way it is not unconscious and must be stunned before anything else is done to it. If a fish

responds to handling or the cut of the knife when exsanguinated then it is definitely not stunned.