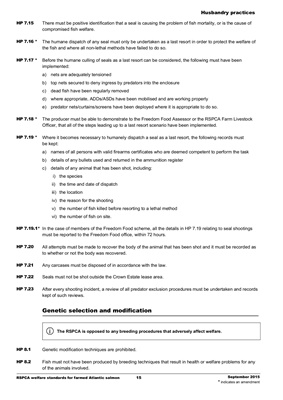 HP 7.15 There must be positive identification that a seal is causing the problem of fish mortality, or is the cause of

HP 7.16 * The humane dispatch of any seal must only be undertaken as a last resort in order to protect the welfare of

the fish and where all non-lethal methods have failed to do so.

HP 7.17 * Before the humane culling of seals as a last resort can be considered, the following must have been

a) nets are adequately tensioned

d) where appropriate, ADDs/ASDs have been mobilised and are working properly

e) predator nets/curtains/screens have been deployed where it is appropriate to do so.

HP 7.18 * The producer must be able to demonstrate to the Freedom Food Assessor or the RSPCA Farm Livestock

Officer, that all of the steps leading up to a last resort scenario have been implemented.

HP 7.19 * Where it becomes necessary to humanely dispatch a seal as a last resort, the following records must

c) details of any animal that has been shot, including:

ii) the time and date of dispatch

iv) the reason for the shooting

vi) the number of fish on site.

HP 7.19.1* In the case of members of the Freedom Food scheme, all the details in HP 7.19 relating to seal shootings

must be reported to the Freedom Food office, within 72 hours.

HP 7.20 All attempts must be made to recover the body of the animal that has been shot and it must be recorded as

to whether or not the body was recovered.

HP 7.21 Any carcases must be disposed of in accordance with the law.

HP 7.22 Seals must not be shot outside the Crown Estate lease area.

HP 7.23 After every shooting incident, a review of all predator exclusion procedures must be undertaken and records

kept of such reviews.

The RSPCA is opposed to any breeding procedures that adversely affect welfare.

HP 8.2 Fish must not have been produced by breeding techniques that result in health or welfare problems for any

of the animals involved.