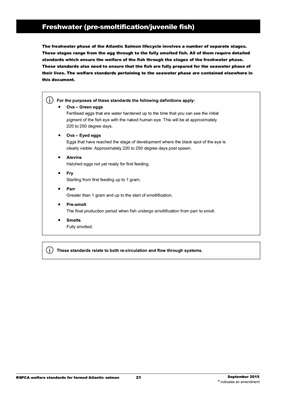 The freshwater phase of the Atlantic Salmon lifecycle involves a number of separate stages.

These stages range from the egg through to the fully smolted fish. All of them require detailed

standards which ensure the welfare of the fish through the stages of the freshwater phase.

their lives. The welfare standards pertaining to the seawater phase are contained elsewhere in

For the purposes of these standards the following definitions apply:

pigment of the fish eye with the naked human eye. This will be at approximately

Hatched eggs not yet ready for first feeding.

Starting from first feeding up to 1 gram.

Greater than 1 gram and up to the start of smoltification.

The final production period when fish undergo smoltification from parr to smolt.

These standards relate to both re-circulation and flow through systems.