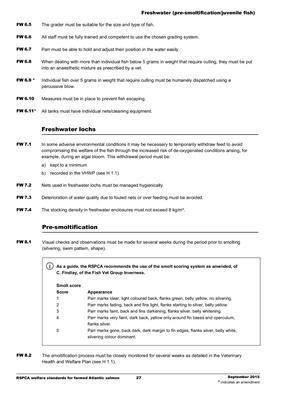 FW 6.5 The grader must be suitable for the size and type of fish.

FW 6.6 All staff must be fully trained and competent to use the chosen grading system.

FW 6.7 Parr must be able to hold and adjust their position in the water easily.

FW 6.8 When dealing with more than individual fish below 5 grams in weight that require culling, they must be put

into an anaesthetic mixture as prescribed by a vet.

FW 6.9 * Individual fish over 5 grams in weight that require culling must be humanely dispatched using a

FW 6.10 Measures must be in place to prevent fish escaping.

FW 6.11* All tanks must have individual nets/cleaning equipment.

compromising the welfare of the fish through the increased risk of de-oxygenated conditions arising, for

example, during an algal bloom. This withdrawal period must be:

a) kept to a minimum

FW 7.2 Nets used in freshwater lochs must be managed hygienically.

FW 7.3 Deterioration of water quality due to fouled nets or over feeding must be avoided.

FW 7.4 The stocking density in freshwater enclosures must not exceed 8 kg/m³.

FW 8.1 Visual checks and observations must be made for several weeks during the period prior to smolting

As a guide, the RSPCA recommends the use of the smolt scoring system as amended, of

4 Parr marks very faint, dark back, yellow only around fin bases and operculum,

FW 8.2 The smoltification process must be closely monitored for several weeks as detailed in the Veterinary