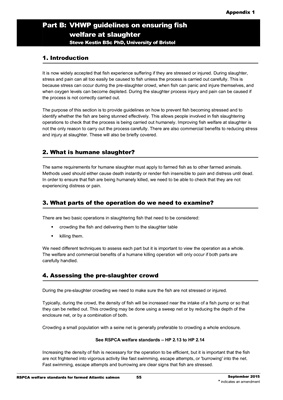 It is now widely accepted that fish experience suffering if they are stressed or injured. During slaughter,

stress and pain can all too easily be caused to fish unless the process is carried out carefully. This is

because stress can occur during the pre-slaughter crowd, when fish can panic and injure themselves, and

when oxygen levels can become depleted. During the slaughter process injury and pain can be caused if

the process is not correctly carried out.

identify whether the fish are being stunned effectively. This allows people involved in fish slaughtering

operations to check that the process is being carried out humanely. Improving fish welfare at slaughter is

not the only reason to carry out the process carefully. There are also commercial benefits to reducing stress

and injury at slaughter. These will also be briefly covered.

2. What is humane slaughter?

The same requirements for humane slaughter must apply to farmed fish as to other farmed animals.

Methods used should either cause death instantly or render fish insensible to pain and distress until dead.

In order to ensure that fish are being humanely killed, we need to be able to check that they are not

3. What parts of the operation do we need to examine?

There are two basic operations in slaughtering fish that need to be considered:

 crowding the fish and delivering them to the slaughter table

We need different techniques to assess each part but it is important to view the operation as a whole.

During the pre-slaughter crowding we need to make sure the fish are not stressed or injured.

Typically, during the crowd, the density of fish will be increased near the intake of a fish pump or so that

they can be netted out. This crowding may be done using a sweep net or by reducing the depth of the

enclosure net, or by a combination of both.

Crowding a small population with a seine net is generally preferable to crowding a whole enclosure.

Increasing the density of fish is necessary for the operation to be efficient, but it is important that the fish

are not frightened into vigorous activity like fast swimming, escape attempts, or 'burrowing' into the net.

Fast swimming, escape attempts and burrowing are clear signs that fish are stressed.