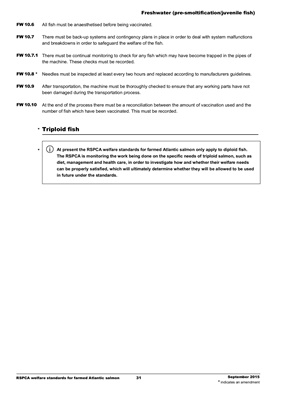 FW 10.6 All fish must be anaesthetised before being vaccinated.

FW 10.7 There must be back-up systems and contingency plans in place in order to deal with system malfunctions

and breakdowns in order to safeguard the welfare of the fish.

FW 10.7.1 There must be continual monitoring to check for any fish which may have become trapped in the pipes of

the machine. These checks must be recorded.

FW 10.8 * Needles must be inspected at least every two hours and replaced according to manufacturers guidelines.

FW 10.9 After transportation, the machine must be thoroughly checked to ensure that any working parts have not

been damaged during the transportation process.

FW 10.10 At the end of the process there must be a reconciliation between the amount of vaccination used and the

number of fish which have been vaccinated. This must be recorded.

At present the RSPCA welfare standards for farmed Atlantic salmon only apply to diploid fish.

The RSPCA is monitoring the work being done on the specific needs of triploid salmon, such as

diet, management and health care, in order to investigate how and whether their welfare needs

can be properly satisfied, which will ultimately determine whether they will be allowed to be used

in future under the standards.