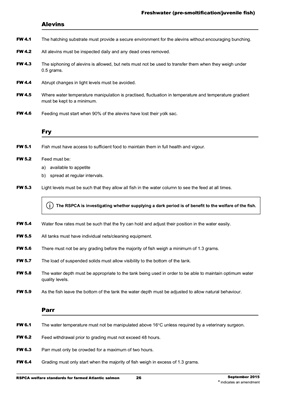 FW 4.1 The hatching substrate must provide a secure environment for the alevins without encouraging bunching.

FW 4.2 All alevins must be inspected daily and any dead ones removed.

FW 4.3 The siphoning of alevins is allowed, but nets must not be used to transfer them when they weigh under

FW 4.4 Abrupt changes in light levels must be avoided.

must be kept to a minimum.

FW 4.6 Feeding must start when 90% of the alevins have lost their yolk sac.

FW 5.1 Fish must have access to sufficient food to maintain them in full health and vigour.

a) available to appetite

b) spread at regular intervals.

FW 5.3 Light levels must be such that they allow all fish in the water column to see the feed at all times.

The RSPCA is investigating whether supplying a dark period is of benefit to the welfare of the fish.

FW 5.4 Water flow rates must be such that the fry can hold and adjust their position in the water easily.

FW 5.5 All tanks must have individual nets/cleaning equipment.

FW 5.6 There must not be any grading before the majority of fish weigh a minimum of 1.3 grams.

FW 5.7 The load of suspended solids must allow visibility to the bottom of the tank.

FW 5.8 The water depth must be appropriate to the tank being used in order to be able to maintain optimum water

FW 5.9 As the fish leave the bottom of the tank the water depth must be adjusted to allow natural behaviour.

FW 6.1 The water temperature must not be manipulated above 16C unless required by a veterinary surgeon.

FW 6.2 Feed withdrawal prior to grading must not exceed 48 hours.

FW 6.3 Parr must only be crowded for a maximum of two hours.

FW 6.4 Grading must only start when the majority of fish weigh in excess of 1.3 grams.