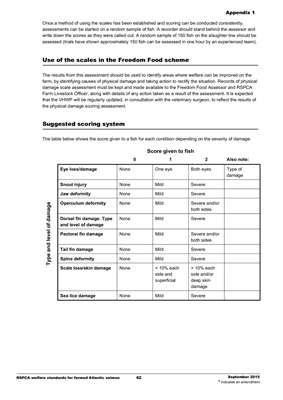 Once a method of using the scales has been established and scoring can be conducted consistently,

assessments can be started on a random sample of fish. A recorder should stand behind the assessor and

write down the scores as they were called out. A random sample of 150 fish on the slaughter line should be

assessed (trials have shown approximately 150 fish can be assessed in one hour by an experienced team).

Use of the scales in the Freedom Food scheme

farm, by identifying causes of physical damage and taking action to rectify the situation. Records of physical

Farm Livestock Officer, along with details of any action taken as a result of the assessment. It is expected

that the VHWP will be regularly updated, in consultation with the veterinary surgeon, to reflect the results of

The table below shows the score given to a fish for each condition depending on the severity of damage.

Score given to fish

Type and level of damage

Eye loss/damage None One eye Both eyes Type of

Operculum deformity None Mild Severe and/or

and level of damage

Scale loss/skin damage None < 10% each