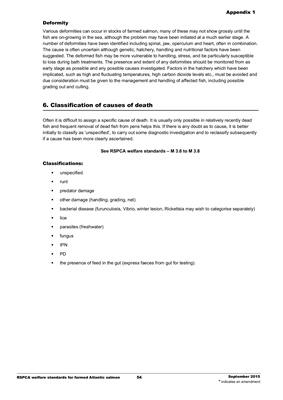 Various deformities can occur in stocks of farmed salmon, many of these may not show grossly until the

fish are on-growing in the sea, although the problem may have been initiated at a much earlier stage. A

number of deformities have been identified including spinal, jaw, operculum and heart, often in combination.

The cause is often uncertain although genetic, hatchery, handling and nutritional factors have been

suggested. The deformed fish may be more vulnerable to handling, stress, and be particularly susceptible

to loss during bath treatments. The presence and extent of any deformities should be monitored from as

early stage as possible and any possible causes investigated. Factors in the hatchery which have been

implicated, such as high and fluctuating temperatures, high carbon dioxide levels etc., must be avoided and

due consideration must be given to the management and handling of affected fish, including possible

grading out and culling.

6. Classification of causes of death

Often it is difficult to assign a specific cause of death. It is usually only possible in relatively recently dead

fish and frequent removal of dead fish from pens helps this. If there is any doubt as to cause, it is better

initially to classify as 'unspecified', to carry out some diagnostic investigation and to reclassify subsequently

if a cause has been more clearly ascertained.

 the presence of feed in the gut (express faeces from gut for testing).