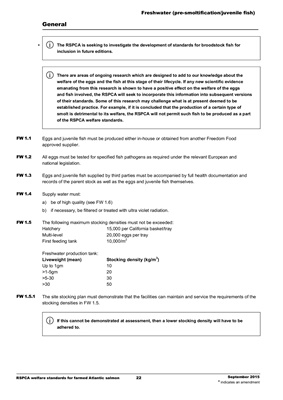 welfare of the eggs and the fish at this stage of their lifecycle. If any new scientific evidence

and fish involved, the RSPCA will seek to incorporate this information into subsequent versions

of their standards. Some of this research may challenge what is at present deemed to be

established practice. For example, if it is concluded that the production of a certain type of

smolt is detrimental to its welfare, the RSPCA will not permit such fish to be produced as a part

of the RSPCA welfare standards.

FW 1.1 Eggs and juvenile fish must be produced either in-house or obtained from another Freedom Food

FW 1.2 All eggs must be tested for specified fish pathogens as required under the relevant European and

FW 1.3 Eggs and juvenile fish supplied by third parties must be accompanied by full health documentation and

records of the parent stock as well as the eggs and juvenile fish themselves.

b) if necessary, be filtered or treated with ultra violet radiation.

FW 1.5 The following maximum stocking densities must not be exceeded:

FW 1.5.1 The site stocking plan must demonstrate that the facilities can maintain and service the requirements of the

If this cannot be demonstrated at assessment, then a lower stocking density will have to be