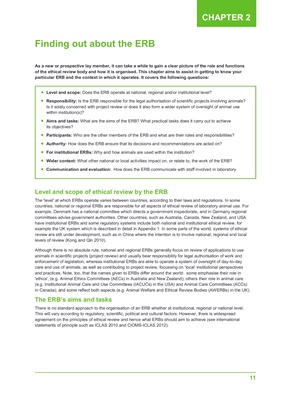 Finding out about the ERB

As a new or prospective lay member, it can take a while to gain a clear picture of the role and functions

of the ethical review body and how it is organised. This chapter aims to assist in getting to know your

particular ERB and the context in which it operates. It covers the following questions:

 Level and scope: Does the ERB operate at national, regional and/or institutional level?

 Responsibility: Is the ERB responsible for the legal authorisation of scientific projects involving animals?

 Aims and tasks: What are the aims of the ERB? What practical tasks does it carry out to achieve

 Participants: Who are the other members of the ERB and what are their roles and responsibilities?

 Authority: How does the ERB ensure that its decisions and recommendations are acted on?

 For institutional ERBs: Why and how animals are used within the institution?

 Wider context: What other national or local activities impact on, or relate to, the work of the ERB?

 Communication and evaluation: How does the ERB communicate with staff involved in laboratory

Level and scope of ethical review by the ERB

The 'level' at which ERBs operate varies between countries, according to their laws and regulations. In some

countries, national or regional ERBs are responsible for all aspects of ethical review of laboratory animal use. For

example, Denmark has a national committee which directs a government inspectorate, and in Germany regional

example the UK system which is described in detail in Appendix 1. In some parts of the world, systems of ethical

review are still under development, such as in China where the intention is to involve national, regional and local

Although there is no absolute rule, national and regional ERBs generally focus on review of applications to use

enforcement of legislation; whereas institutional ERBs are able to operate a system of oversight of day-to-day

care and use of animals, as well as contributing to project review, focussing on "local" institutional perspectives

and practices. Note, too, that the names given to ERBs differ around the world: some emphasise their role in

in Canada); and some reflect both aspects (e.g. Animal Welfare and Ethical Review Bodies (AWERBs) in the UK).

The ERB"s aims and tasks

There is no standard approach to the organisation of an ERB whether at institutional, regional or national level.

This will vary according to regulatory, scientific, political and cultural factors. However, there is widespread