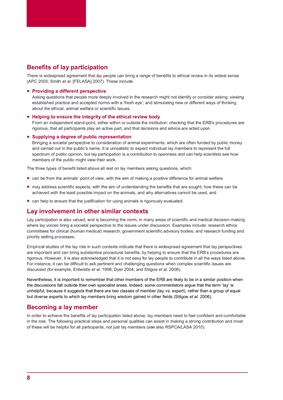 Asking questions that people more deeply involved in the research might not identify or consider asking; viewing

established practice and accepted norms with a "fresh eye"; and stimulating new or different ways of thinking

about the ethical, animal welfare or scientific issues.

 Helping to ensure the integrity of the ethical review body

From an independent stand-point, either within or outside the institution: checking that the ERB's procedures are

rigorous, that all participants play an active part, and that decisions and advice are acted upon.

Bringing a societal perspective to consideration of animal experiments, which are often funded by public money

and carried out in the public"s name. It is unrealistic to expect individual lay members to represent the full

spectrum of public opinion, but lay participation is a contribution to openness and can help scientists see how

The three types of benefit listed above all rest on lay members asking questions, which:

 can be from the animals" point of view, with the aim of making a positive difference for animal welfare

 may address scientific aspects, with the aim of understanding the benefits that are sought, how these can be

achieved with the least possible impact on the animals, and why alternatives cannot be used, and

 can help to ensure that the justification for using animals is rigorously evaluated.

Lay involvement in other similar contexts

Lay participation is also valued, and is becoming the norm, in many areas of scientific and medical decision-making

where lay voices bring a societal perspective to the issues under discussion. Examples include: research ethics

are important and can bring substantive procedural benefits, by helping to ensure that the ERB"s procedures are

rigorous. However, it is also acknowledged that it is not easy for lay people to contribute in all the ways listed above.

For instance, it can be difficult to ask pertinent and challenging questions when complex scientific issues are

Nevertheless, it is important to remember that other members of the ERB are likely to be in a similar position when

the discussions fall outside their own specialist areas. Indeed, some commentators argue that the term "lay" is

unhelpful, because it suggests that there are two classes of member (lay vs. expert), rather than a group of equal

but diverse experts to which lay members bring wisdom gained in other fields (Stilgoe et al. 2006).

In order to achieve the benefits of lay participation listed above, lay members need to feel confident and comfortable

in the role. The following practical steps and personal qualities can assist in making a strong contribution and most

of these will be helpful for all participants, not just lay members (see also RSPCA/LASA 2010).