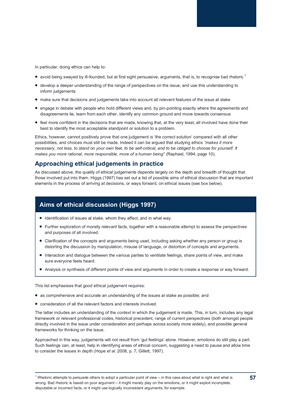 In particular, doing ethics can help to:

 avoid being swayed by ill-founded, but at first sight persuasive, arguments, that is, to recognise bad rhetoric 1

 engage in debate with people who hold different views and, by pin-pointing exactly where the agreements and

disagreements lie, learn from each other, identify any common ground and move towards consensus

 feel more confident in the decisions that are made, knowing that, at the very least, all involved have done their

best to identify the most acceptable standpoint or solution to a problem.

Ethics, however, cannot positively prove that one judgement is "the correct solution" compared with all other

possibilities, and choices must still be made. Indeed it can be argued that studying ethics "makes it more

necessary, not less, to stand on your own feet, to be self-critical, and to be obliged to choose for yourself. It

As discussed above, the quality of ethical judgements depends largely on the depth and breadth of thought that

those involved put into them. Higgs (1997) has set out a list of possible aims of ethical discussion that are important

elements in the process of arriving at decisions, or ways forward, on ethical issues (see box below).

 as comprehensive and accurate an understanding of the issues at stake as possible; and

 consideration of all the relevant factors and interests involved.

The latter includes an understanding of the context in which the judgement is made. This, in turn, includes any legal

directly involved in the issue under consideration and perhaps across society more widely), and possible general

frameworks for thinking on the issue.

Approached in this way, judgements will not result from "gut feelings" alone. However, emotions do still play a part.

Such feelings can, at least, help in identifying areas of ethical concern, suggesting a need to pause and allow time

 Identification of issues at stake, whom they affect, and in what way.

 Further exploration of morally relevant facts, together with a reasonable attempt to assess the perspectives

and purposes of all involved.

 Clarification of the concepts and arguments being used, including asking whether any person or group is

distorting the discussion by manipulation, misuse of language, or distortion of concepts and arguments.

 Interaction and dialogue between the various parties to ventilate feelings, share points of view, and make

sure everyone feels heard.

 Analysis or synthesis of different points of view and arguments in order to create a response or way forward.

wrong. Bad rhetoric is based on poor argument - it might merely play on the emotions, or it might exploit incomplete,

disputable or incorrect facts, or it might use logically inconsistent arguments, for example.