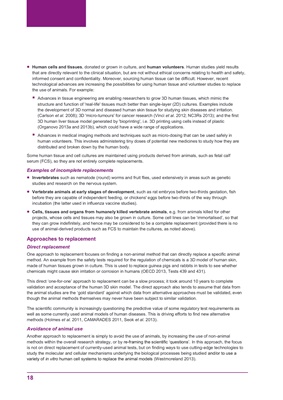 that are directly relevant to the clinical situation, but are not without ethical concerns relating to health and safety,

informed consent and confidentiality. Moreover, sourcing human tissue can be difficult. However, recent

the use of animals. For example:

 Advances in tissue engineering are enabling researchers to grow 3D human tissues, which mimic the

structure and function of 'real-life' tissues much better than single-layer (2D) cultures. Examples include

the development of 3D normal and diseased human skin tissue for studying skin diseases and irritation.

human volunteers. This involves administering tiny doses of potential new medicines to study how they are

distributed and broken down by the human body.

Some human tissue and cell cultures are maintained using products derived from animals, such as fetal calf

serum (FCS), so they are not entirely complete replacements.

 Invertebrates such as nematode (round) worms and fruit flies, used extensively in areas such as genetic

studies and research on the nervous system.

 Vertebrate animals at early stages of development, such as rat embryos before two-thirds gestation, fish

before they are capable of independent feeding, or chickens' eggs before two-thirds of the way through

 Cells, tissues and organs from humanely killed vertebrate animals, e.g. from animals killed for other

projects, whose cells and tissues may also be grown in culture. Some cell lines can be "immortalised", so that

they can grow indefinitely, and hence may be considered to be a complete replacement (provided there is no

use of animal-derived products such as FCS to maintain the cultures, as noted above).

method. An example from the safety tests required for the regulation of chemicals is a 3D model of human skin,

made of human tissues grown in culture. This is used to replace guinea pigs and rabbits in tests to see whether

This direct "one-for-one" approach to replacement can be a slow process; it took around 10 years to complete

validation and acceptance of the human 3D skin model. The direct approach also tends to assume that data from

the animal studies are the "gold standard" against which data from alternative approaches must be validated, even

though the animal methods themselves may never have been subject to similar validation.

well as some currently used animal models of human diseases. This is driving efforts to find new alternative

Avoidance of animal use

Another approach to replacement is simply to avoid the use of animals, by increasing the use of non-animal

methods within the overall research strategy, or by re-framing the scientific "questions". In this approach, the focus

is not on direct replacement of currently-used animal tests, but on finding ways to use cutting-edge technologies to

variety of in vitro human cell systems to replace the animal models (Westmoreland 2013).