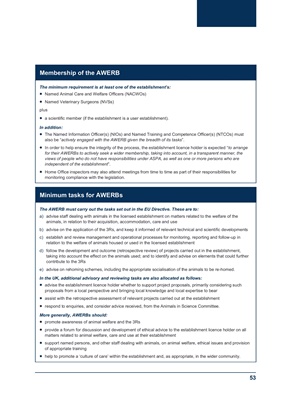 The minimum requirement is at least one of the establishment's:

also be "actively engaged with the AWERB given the breadth of its tasks".

 In order to help ensure the integrity of the process, the establishment licence holder is expected "to arrange

for their AWERBs to actively seek a wider membership, taking into account, in a transparent manner, the

views of people who do not have responsibilities under ASPA, as well as one or more persons who are

independent of the establishment".

monitoring compliance with the legislation.

The AWERB must carry out the tasks set out in the EU Directive. These are to:

animals, in relation to their acquisition, accommodation, care and use

b) advise on the application of the 3Rs, and keep it informed of relevant technical and scientific developments

c) establish and review management and operational processes for monitoring, reporting and follow-up in

d) follow the development and outcome (retrospective review) of projects carried out in the establishment,

taking into account the effect on the animals used; and to identify and advise on elements that could further

contribute to the 3Rs

e) advise on rehoming schemes, including the appropriate socialisation of the animals to be re-homed.

In the UK, additional advisory and reviewing tasks are also allocated as follows:

 respond to enquiries, and consider advice received, from the Animals in Science Committee.

 promote awareness of animal welfare and the 3Rs

matters related to animal welfare, care and use at their establishment

 help to promote a "culture of care" within the establishment and, as appropriate, in the wider community.