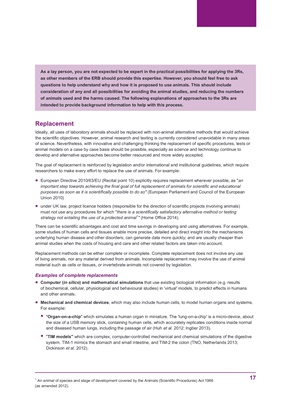 As a lay person, you are not expected to be expert in the practical possibilities for applying the 3Rs,

as other members of the ERB should provide this expertise. However, you should feel free to ask

questions to help understand why and how it is proposed to use animals. This should include

consideration of any and all possibilities for avoiding the animal studies, and reducing the numbers

of animals used and the harms caused. The following explanations of approaches to the 3Rs are

intended to provide background information to help with this process.

Ideally, all uses of laboratory animals should be replaced with non-animal alternative methods that would achieve

the scientific objectives. However, animal research and testing is currently considered unavoidable in many areas

of science. Nevertheless, with innovative and challenging thinking the replacement of specific procedures, tests or

animal models on a case by case basis should be possible, especially as science and technology continue to

The goal of replacement is reinforced by legislation and/or international and institutional guidelines, which require

researchers to make every effort to replace the use of animals. For example:

strategy not entailing the use of a protected animal1

There can be scientific advantages and cost and time savings in developing and using alternatives. For example,

some studies of human cells and tissues enable more precise, detailed and direct insight into the mechanisms

underlying human disease and other disorders; can generate data more quickly; and are usually cheaper than

animal studies when the costs of housing and care and other related factors are taken into account.

Replacement methods can be either complete or incomplete. Complete replacement does not involve any use

of living animals, nor any material derived from animals. Incomplete replacement may involve the use of animal

material such as cells or tissues, or invertebrate animals not covered by legislation.

of biochemical, cellular, physiological and behavioural studies) in 'virtual' models, to predict effects in humans

 Mechanical and chemical devices, which may also include human cells, to model human organs and systems.

 "Organ-on-a-chip" which simulates a human organ in miniature. The 'lung-on-a-chip' is a micro-device, about

the size of a USB memory stick, containing human cells, which accurately replicates conditions inside normal

 "TIM models" which are complex, computer-controlled mechanical and chemical simulations of the digestive