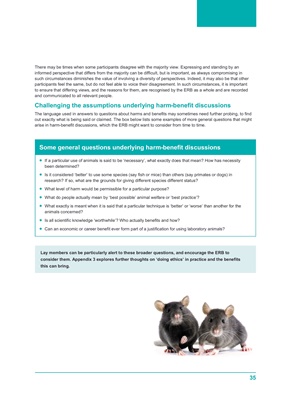 There may be times when some participants disagree with the majority view. Expressing and standing by an

informed perspective that differs from the majority can be difficult, but is important, as always compromising in

such circumstances diminishes the value of involving a diversity of perspectives. Indeed, it may also be that other

participants feel the same, but do not feel able to voice their disagreement. In such circumstances, it is important

to ensure that differing views, and the reasons for them, are recognised by the ERB as a whole and are recorded

and communicated to all relevant people.

The language used in answers to questions about harms and benefits may sometimes need further probing, to find

out exactly what is being said or claimed. The box below lists some examples of more general questions that might

arise in harm-benefit discussions, which the ERB might want to consider from time to time.

 If a particular use of animals is said to be "necessary", what exactly does that mean? How has necessity

research? If so, what are the grounds for giving different species different status?

 What level of harm would be permissible for a particular purpose?

 Is all scientific knowledge "worthwhile"? Who actually benefits and how?

 Can an economic or career benefit ever form part of a justification for using laboratory animals?

Lay members can be particularly alert to these broader questions, and encourage the ERB to

consider them. Appendix 3 explores further thoughts on "doing ethics" in practice and the benefits