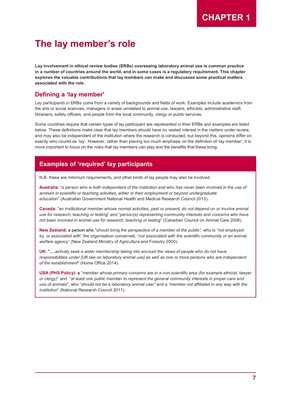 in a number of countries around the world, and in some cases is a regulatory requirement. This chapter

associated with the role.

Lay participants in ERBs come from a variety of backgrounds and fields of work. Examples include academics from

the arts or social sciences, managers in areas unrelated to animal use, lawyers, ethicists, administrative staff,

librarians, safety officers, and people from the local community, clergy or public services.

below. These definitions make clear that lay members should have no vested interest in the matters under review,

and may also be independent of the institution where the research is conducted; but beyond this, opinions differ on

exactly who counts as "lay". However, rather than placing too much emphasis on the definition of "lay member", it is

more important to focus on the roles that lay members can play and the benefits that these bring.

N.B. these are minimum requirements, and other kinds of lay people may also be involved.

Australia: "a person who is both independent of the institution and who has never been involved in the use of

animals in scientific or teaching activities, either in their employment or beyond undergraduate

Canada: "an institutional member whose normal activities, past or present, do not depend on or involve animal

use for research, teaching or testing" and "person(s) representing community interests and concerns who have

not been involved in animal use for research, teaching or testing" (Canadian Council on Animal Care 2006).

New Zealand: a person who "should bring the perspective of a member of the public", who is "not employed

UK: "….actively seek a wider membership taking into account the views of people who do not have

USA (PHS Policy): a "member whose primary concerns are in a non-scientific area (for example ethicist, lawyer

use of animals", who "should not be a laboratory animal user" and a "member not affiliated in any way with the