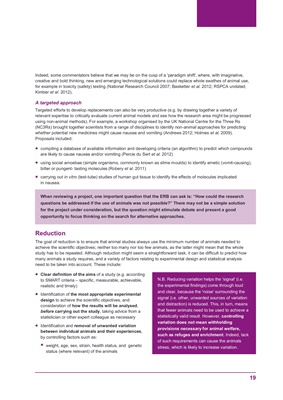 Indeed, some commentators believe that we may be on the cusp of a 'paradigm shift', where, with imaginative,

creative and bold thinking, new and emerging technological solutions could replace whole swathes of animal use,

Targeted efforts to develop replacements can also be very productive (e.g. by drawing together a variety of

using non-animal methods). For example, a workshop organised by the UK National Centre for the Three Rs

whether potential new medicines might cause nausea and vomiting (Andrews 2012; Holmes et al. 2009).

are likely to cause nausea and/or vomiting (Percie du Sert et al. 2012)

achieve the scientific objectives; neither too many nor too few animals, as the latter might mean that the whole

study has to be repeated. Although reduction might seem a straightforward task, it can be difficult to predict how

many animals a study requires, and a variety of factors relating to experimental design and statistical analysis

 Clear definition of the aims of a study (e.g. according

 Identification of the most appropriate experimental

design to achieve the scientific objectives, and

consideration of how the results will be analysed,

before carrying out the study, taking advice from a

statistician or other expert colleague as necessary

between individual animals and their experiences,

by controlling factors such as:

status (where relevant) of the animals

When reviewing a project, one important question that the ERB can ask is: "How could the research

questions be addressed if the use of animals was not possible?" There may not be a simple solution

for the project under consideration, but the question might stimulate debate and present a good

opportunity to focus thinking on the search for alternative approaches.

the experimental findings) come through loud

and clear, because the 'noise' surrounding the

and distraction) is reduced. This, in turn, means

that fewer animals need to be used to achieve a

variation does not mean withholding

such as refuges and enrichment. Indeed, lack

of such requirements can cause the animals

stress, which is likely to increase variation.