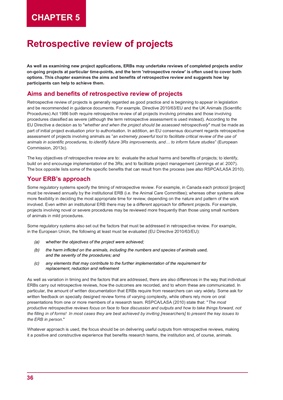 Aims and benefits of retrospective review of projects

and be recommended in guidance documents. For example, Directive 2010/63/EU and the UK Animals (Scientific

procedures classified as severe (although the term retrospective assessment is used instead). According to the

part of initial project evaluation prior to authorisation. In addition, an EU consensus document regards retrospective

The key objectives of retrospective review are to: evaluate the actual harms and benefits of projects; to identify,

build on and encourage implementation of the 3Rs; and to facilitate project management (Jennings et al. 2007).

The box opposite lists some of the specific benefits that can result from the process (see also RSPCA/LASA 2010).

Some regulatory systems specify the timing of retrospective review. For example, in Canada each protocol [project]

must be reviewed annually by the institutional ERB (i.e. the Animal Care Committee); whereas other systems allow

more flexibility in deciding the most appropriate time for review, depending on the nature and pattern of the work

involved. Even within an institutional ERB there may be a different approach for different projects. For example,

of animals in mild procedures.

Some regulatory systems also set out the factors that must be addressed in retrospective review. For example,

in the European Union, the following at least must be evaluated (EU Directive 2010/63/EU):

(a) whether the objectives of the project were achieved;

(b) the harm inflicted on the animals, including the numbers and species of animals used,

and the severity of the procedures; and

As well as variation in timing and the factors that are addressed, there are also differences in the way that individual

ERBs carry out retrospective reviews, how the outcomes are recorded, and to whom these are communicated. In

particular, the amount of written documentation that ERBs require from researchers can vary widely. Some ask for

written feedback on specially designed review forms of varying complexity, while others rely more on oral

presentations from one or more members of a research team. RSPCA/LASA (2010) state that: "The most

productive retrospective reviews focus on face to face discussion and outputs and how to take things forward, not

the filling in of forms! In most cases they are best achieved by inviting [researchers] to present the key issues to

the ERB in person."

Whatever approach is used, the focus should be on delivering useful outputs from retrospective reviews, making

it a positive and constructive experience that benefits research teams, the institution and, of course, animals.

As well as examining new project applications, ERBs may undertake reviews of completed projects and/or

on-going projects at particular time-points, and the term 'retrospective review' is often used to cover both

options. This chapter examines the aims and benefits of retrospective review and suggests how lay

participants can help to achieve them.