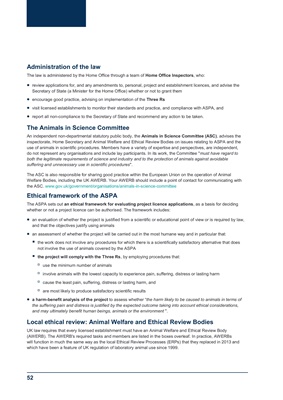 Administration of the law

The law is administered by the Home Office through a team of Home Office Inspectors, who:

 review applications for, and any amendments to, personal, project and establishment licences, and advise the

 visit licensed establishments to monitor their standards and practice, and compliance with ASPA, and

 report all non-compliance to the Secretary of State and recommend any action to be taken.

The Animals in Science Committee

inspectorate, Home Secretary and Animal Welfare and Ethical Review Bodies on issues relating to ASPA and the

use of animals in scientific procedures. Members have a variety of expertise and perspectives, are independent,

do not represent any organisations and include lay participants. In its work, the Committee "must have regard to

suffering and unnecessary use in scientific procedures".

Welfare Bodies, including the UK AWERB. Your AWERB should include a point of contact for communicating with

Ethical framework of the ASPA

The ASPA sets out an ethical framework for evaluating project licence applications, as a basis for deciding

whether or not a project licence can be authorised. The framework includes:

 an evaluation of whether the project is justified from a scientific or educational point of view or is required by law,

and that the objectives justify using animals

 an assessment of whether the project will be carried out in the most humane way and in particular that:

not involve the use of animals covered by the ASPA

 the project will comply with the Three Rs, by employing procedures that:

 use the minimum number of animals

 cause the least pain, suffering, distress or lasting harm, and

 are most likely to produce satisfactory scientific results

the suffering pain and distress is justified by the expected outcome taking into account ethical considerations,

and may ultimately benefit human beings, animals or the environment ".

(AWERB). The AWERB's required tasks and members are listed in the boxes overleaf. In practice, AWERBs

which have been a feature of UK regulation of laboratory animal use since 1999.