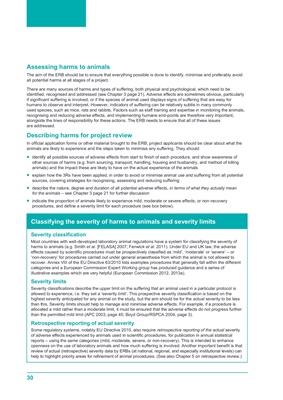 The aim of the ERB should be to ensure that everything possible is done to identify, minimise and preferably avoid

all potential harms at all stages of a project.

There are many sources of harms and types of suffering, both physical and psychological, which need to be

if significant suffering is involved, or if the species of animal used displays signs of suffering that are easy for

humans to observe and interpret. However, indicators of suffering can be relatively subtle in many commonly

used species, such as mice, rats and rabbits. Factors such as staff training and expertise in monitoring the animals,

alongside the lines of responsibility for these actions. The ERB needs to ensure that all of these issues

In official application forms or other material brought to the ERB, project applicants should be clear about what the

animals are likely to experience and the steps taken to minimise any suffering. They should:

 identify all possible sources of adverse effects from start to finish of each procedure, and show awareness of

other sources of harms (e.g. from sourcing, transport, handling, housing and husbandry, and method of killing

 explain how the 3Rs have been applied, in order to avoid or minimise animal use and suffering from all potential

 describe the nature, degree and duration of all potential adverse effects, in terms of what they actually mean

for the animals - see Chapter 3 page 21 for further discussion

 indicate the proportion of animals likely to experience mild, moderate or severe effects, or non-recovery

procedures, and define a severity limit for each procedure (see box below).

Classifying the severity of harms to animals and severity limits

effects caused by scientific procedures must be prospectively classified as "mild", "moderate" or "severe" - or

recover. Annex VIII of the EU Directive 63/2010 lists examples procedures that generally fall within the different

illustrative examples which are very helpful (European Commission 2012, 2013a).

allowed to experience, i.e. they set a "severity limit". This prospective severity classification is based on the

highest severity anticipated for any animal on the study, but the aim should be for the actual severity to be less

than this. Severity limits should help to manage and minimise adverse effects. For example, if a procedure is

allocated a mild rather than a moderate limit, it must be ensured that the adverse effects do not progress further

of adverse effects experienced by animals used in scientific procedures, for publication in annual statistical

reports - using the same categories (mild, moderate, severe, or non-recovery). This is intended to enhance

openness on the use of laboratory animals and how much suffering is involved. Another important benefit is that

review of actual (retrospective) severity data by ERBs (at national, regional, and especially institutional levels) can