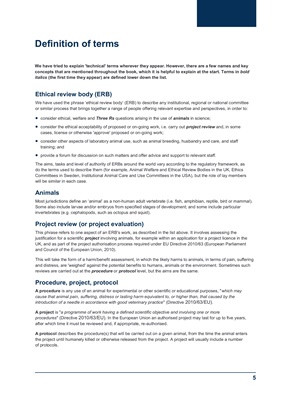 We have tried to explain 'technical' terms wherever they appear. However, there are a few names and key

concepts that are mentioned throughout the book, which it is helpful to explain at the start. Terms in bold

italics (the first time they appear) are defined lower down the list.

We have used the phrase "ethical review body" (ERB) to describe any institutional, regional or national committee

or similar process that brings together a range of people offering relevant expertise and perspectives, in order to:

 consider ethical, welfare and Three Rs questions arising in the use of animals in science;

 consider the ethical acceptability of proposed or on-going work, i.e. carry out project review and, in some

 consider other aspects of laboratory animal use, such as animal breeding, husbandry and care, and staff

 provide a forum for discussion on such matters and offer advice and support to relevant staff.

The aims, tasks and level of authority of ERBs around the world vary according to the regulatory framework, as

do the terms used to describe them (for example, Animal Welfare and Ethical Review Bodies in the UK, Ethics

will be similar in each case.

Some also include larvae and/or embryos from specified stages of development; and some include particular

invertebrates (e.g. cephalopods, such as octopus and squid).

This phrase refers to one aspect of an ERB's work, as described in the list above. It involves assessing the

justification for a scientific project involving animals, for example within an application for a project licence in the

UK, and as part of the project authorisation process required under EU Directive 2010/63 (European Parliament

This will take the form of a harm/benefit assessment, in which the likely harms to animals, in terms of pain, suffering

and distress, are 'weighed' against the potential benefits to humans, animals or the environment. Sometimes such

reviews are carried out at the procedure or protocol level, but the aims are the same.

A procedure is any use of an animal for experimental or other scientific or educational purposes, "which may

cause that animal pain, suffering, distress or lasting harm equivalent to, or higher than, that caused by the

introduction of a needle in accordance with good veterinary practice" (Directive 2010/63/EU).

procedures" (Directive 2010/63/EU). In the European Union an authorised project may last for up to five years,

after which time it must be reviewed and, if appropriate, re-authorised.

A protocol describes the procedure(s) that will be carried out on a given animal, from the time the animal enters

the project until humanely killed or otherwise released from the project. A project will usually include a number