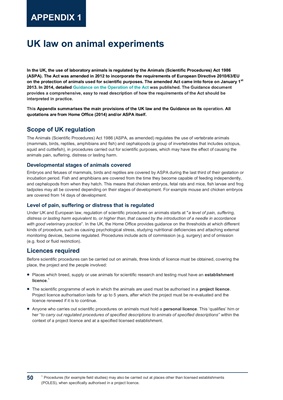 In the UK, the use of laboratory animals is regulated by the Animals (Scientific Procedures) Act 1986

(ASPA). The Act was amended in 2012 to incorporate the requirements of European Directive 2010/63/EU

on the protection of animals used for scientific purposes. The amended Act came into force on January 1st

2013. In 2014, detailed Guidance on the Operation of the Act was published. The Guidance document

provides a comprehensive, easy to read description of how the requirements of the Act should be

This Appendix summarises the main provisions of the UK law and the Guidance on its operation. All

quotations are from Home Office (2014) and/or ASPA itself.

The Animals (Scientific Procedures) Act 1986 (ASPA, as amended) regulates the use of vertebrate animals

(mammals, birds, reptiles, amphibians and fish) and cephalopods (a group of invertebrates that includes octopus,

squid and cuttlefish), in procedures carried out for scientific purposes, which may have the effect of causing the

Embryos and fetuses of mammals, birds and reptiles are covered by ASPA during the last third of their gestation or

incubation period. Fish and amphibians are covered from the time they become capable of feeding independently,

and cephalopods from when they hatch. This means that chicken embryos, fetal rats and mice, fish larvae and frog

tadpoles may all be covered depending on their stages of development. For example mouse and chicken embryos

are covered from 14 days of development.

Level of pain, suffering or distress that is regulated

Under UK and European law, regulation of scientific procedures on animals starts at "a level of pain, suffering,

distress or lasting harm equivalent to, or higher than, that caused by the introduction of a needle in accordance

with good veterinary practice". In the UK, the Home Office provides guidance on the thresholds at which different

Before scientific procedures can be carried out on animals, three kinds of licence must be obtained, covering the

place, the project and the people involved:

 Places which breed, supply or use animals for scientific research and testing must have an establishment

 The scientific programme of work in which the animals are used must be authorised in a project licence.

Project licence authorisation lasts for up to 5 years, after which the project must be re-evaluated and the

licence renewed if it is to continue.

 Anyone who carries out scientific procedures on animals must hold a personal licence. This "qualifies" him or

context of a project licence and at a specified licensed establishment.

(POLES), when specifically authorised in a project licence.