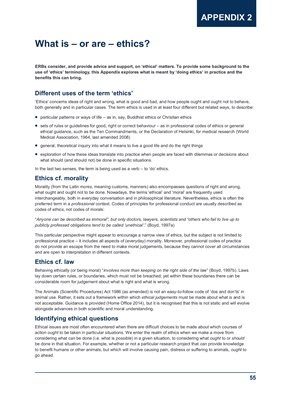 Different uses of the term "ethics"

"Ethics" concerns ideas of right and wrong, what is good and bad, and how people ought and ought not to behave,

both generally and in particular cases. The term ethics is used in at least four different but related ways, to describe:

 particular patterns or ways of life - as in, say, Buddhist ethics or Christian ethics

 sets of rules or guidelines for good, right or correct behaviour - as in professional codes of ethics or general

ethical guidance, such as the Ten Commandments, or the Declaration of Helsinki, for medical research (World

 general, theoretical inquiry into what it means to live a good life and do the right things

what should (and should not) be done in specific situations.

In the last two senses, the term is being used as a verb - to "do" ethics.

what ought and ought not to be done. Nowadays, the terms "ethical" and "moral" are frequently used

interchangeably, both in everyday conversation and in philosophical literature. Nevertheless, ethics is often the

codes of ethics, not codes of morals:

"Anyone can be described as immoral", but only doctors, lawyers, scientists and "others who fail to live up to

publicly professed obligations tend to be called "unethical"." (Boyd, 1997a)

This particular perspective might appear to encourage a narrow view of ethics, but the subject is not limited to

do not provide an escape from the need to make moral judgements, because they cannot cover all circumstances

and are open to interpretation in different contexts.

Behaving ethically (or being moral) "involves more than keeping on the right side of the law" (Boyd, 1997b). Laws

lay down certain rules, or boundaries, which must not be breached; yet within these boundaries there can be

considerable room for judgement about what is right and what is wrong.

animal use. Rather, it sets out a framework within which ethical judgements must be made about what is and is

not acceptable. Guidance is provided (Home Office 2014), but it is recognised that this is not static and will evolve

alongside advances in both scientific and moral understanding.

action ought to be taken in particular situations. We enter the realm of ethics when we make a move from

be done in that situation. For example, whether or not a particular research project that can provide knowledge

to benefit humans or other animals, but which will involve causing pain, distress or suffering to animals, ought to

ERBs consider, and provide advice and support, on "ethical" matters. To provide some background to the

use of "ethics" terminology, this Appendix explores what is meant by "doing ethics" in practice and the

benefits this can bring.