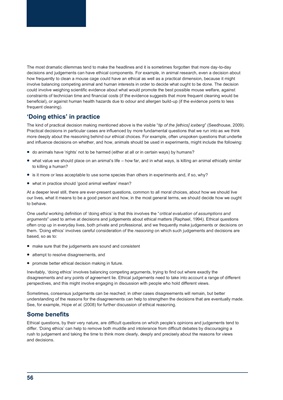 decisions and judgements can have ethical components. For example, in animal research, even a decision about

how frequently to clean a mouse cage could have an ethical as well as a practical dimension, because it might

involve balancing competing animal and human interests in order to decide what ought to be done. The decision

could involve weighing scientific evidence about what would promote the best possible mouse welfare, against

beneficial), or against human health hazards due to odour and allergen build-up (if the evidence points to less

The kind of practical decision making mentioned above is the visible "tip of the [ethics] iceberg" (Seedhouse, 2009).

more deeply about the reasoning behind our ethical choices. For example, often unspoken questions that underlie

and influence decisions on whether, and how, animals should be used in experiments, might include the following:

 do animals have "rights" not to be harmed (either at all or in certain ways) by humans?

 what value we should place on an animal"s life - how far, and in what ways, is killing an animal ethically similar

to killing a human?

 is it more or less acceptable to use some species than others in experiments and, if so, why?

 what in practice should "good animal welfare" mean?

At a deeper level still, there are ever-present questions, common to all moral choices, about how we should live

our lives, what it means to be a good person and how, in the most general terms, we should decide how we ought

often crop up in everyday lives, both private and professional, and we frequently make judgements or decisions on

them. "Doing ethics" involves careful consideration of the reasoning on which such judgements and decisions are

 make sure that the judgements are sound and consistent

 attempt to resolve disagreements, and

disagreements and any points of agreement lie. Ethical judgements need to take into account a range of different

perspectives, and this might involve engaging in discussion with people who hold different views.

Sometimes, consensus judgements can be reached; in other cases disagreements will remain, but better

understanding of the reasons for the disagreements can help to strengthen the decisions that are eventually made.

Ethical questions, by their very nature, are difficult questions on which people"s opinions and judgements tend to

differ. "Doing ethics" can help to remove both muddle and intolerance from difficult debates by discouraging a

rush to judgement and taking the time to think more clearly, deeply and precisely about the reasons for views