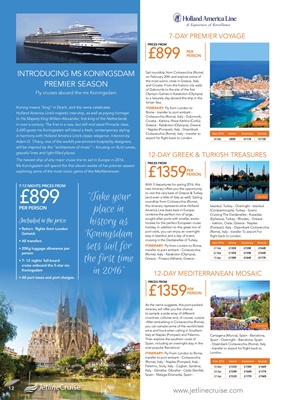 Fly cruises aboard the ms Koningsdam

Koning means "king" in Dutch, and the name celebrates

to His Majesty King Willem-Alexander, first king of the Netherlands

in over a century. The first in a new, but still mid-sized Pinnacle class,

in harmony with Holland America Line's classic elegance. Interiors by

Adam D. Tihany, one of the world's pre-eminent hospitality designers,

will be inspired by the "architecture of music" - focusing on fluid curves,

The newest ship of any major cruise line to sail in Europe in 2016,

exploring some of the most iconic gems of the Mediterranean.

cruise onboard the 5-star ms

• All port taxes and port charges.

on February 20th and explore some of

the most scenic cities in Greece, Italy

and Croatia. From the historic city walls

of Dubrovnik to the site of the first

to a leisurely day aboard the ship in the

ITINERARY: Fly from London to

airport for flight back to London.

As the name suggests, this port-packed

itinerary will offer you the chance

to sample a wide array of different

countries, cultures and, of course, cuisine

.After embarking in Civitavecchia (Rome),

you can sample some of the world's best

wine and food when calling in Southern

Italy at Naples (Pompeii) and Palermo.

Then explore the southern coast of

Spain, including an overnight stay in the

ITINERARY: Fly From London to Rome,

new itinerary offers you the opportunity

to visit the very best of Greece & Turkey

(and even a little of Italy as well). Sailing

this itinerary represents what Holland

America Line does best in Europe:

combine the perfect mix of large,

locales for the perfect European cruise

holiday. In addition to this great mix of

port visits, you can enjoy an overnight

stay in Istanbul and a day of scenic

cruising in the Dardanelles of Turkey.

ITINERARY: Fly from London to Rome,

(Rome), Italy - transfer To airport For

flight back to London.

- transfer to airport for flight back to