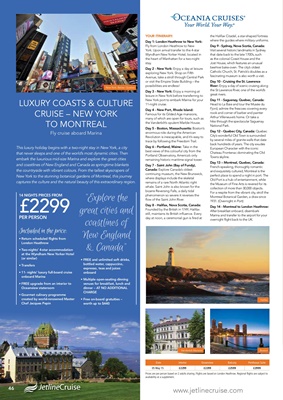 Fly from London Heathrow to New

York. Upon arrival transfer to the 4-star

the heart of Manhattan for a two-night

or visit the Empire State Building - the

leisure in New York before transferring to

New York port to embark Marina for your

Famous for its Gilded Age mansions,

many of which are open for tours, such as

enormous role during the American

Revolution is inescapable, and it's easy to

trace by following the Freedom Trail.

best views of this colourful city from the

where displays include the skeletal

whale. Saint John is also known for the

phenomenon so severe it reverses the

flow of the Saint John River.

Founded by the British in 1749, Halifax

still, maintains its British influence. Every

day at noon, a ceremonial gun is fired at

Prices are per person based on 2 adults sharing. Flights are based on London Heathrow. Regional flights are subject to

availability at a supplement.

This luxury holiday begins with a two-night stay in New York, a city

that never sleeps and one of the world's most dynamic cities. Then

embark the luxurious mid-size Marina and explore the great cities

and coastlines of New England and Canada as springtime blankets

the countryside with vibrant colours. From the tallest skyscrapers of

New York to the stunning botanical gardens of Montreal, this journey

captures the culture and the natural beauty of this extraordinary region.

the Halifax Citadel, a star-shaped fortress

where the guides where military uniforms.

as the colonial Cossit House and the

Jost House, which features an unusual

fascinating museum is also worth a visit.

River: Enjoy a day of scenic cruising along

the St Lawrence River, one of the world's

Head to La Baie and tour the Musée du

Fjord, admire the frescoes covering every

nook and corner of barber and painter

Arthur Villeneuve's home. Or take a

hike through the spectacular Saguenay

by several miles of granite walls that date

back hundreds of years. The city exudes

European Character with the iconic

and exquisitely cultured, Montreal is the

perfect place to spend a night in port. The

Old Port is a hub of entertainment, while

the Museum of Fine Arts is revered for its

For a respite from the vibrant city, stroll the

Montreal Botanical Garden, a draw since

After breakfast onboard, disembark

Marina and transfer to the airport for your

overnight flight back to the UK.

at the Wyndham New Yorker Hotel

• FREE upgrade from an interior to

venues for breakfast, lunch and

dinner - At NO ADDitiONAL