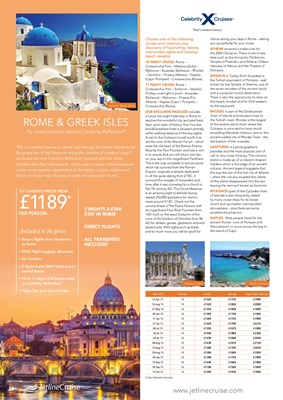 Choose one of the following

cruises and continue your

a luxury two night hotel stay in Rome to

explore this wonderful city and peel back

layer upon layer of history. Your four-star

within walking distance of the key sights.

A visit to the Coliseum is well worth it as

are the ruins of the Roman Forum - which

were the old heart of the Roman Empire.

Stop by the Trevi Fountain and toss a coin

in to ensure that you will return one day

on your way to the magnificent Pantheon.

This is the only complete in-tact structure

which has survived from the Roman

to all the gods dating from 27 BC. It

survived the ravages of marauders and

time after it was converted to a church in

is an amazing sight to behold having

races around 31 BC. Check out the

curious shape of the Piazza Navona with

its magnificent Four River Fountain from

1651 built on the exact footprint of the

ruins of the Stadium of Domitian from 86

beast hunts. With sights such as these

and so much more you will be spoilt for

on board the new Celebrity Reflection® packed with the latest

Solstice class fleet refinements. Unlike many cruises a Mediterranean

cruise is not weather dependent as the sights, culture, cuisine and

history in these major European cities are open year round.

choice during your days in Rome - setting

you up perfectly for your cruise.

ATHENS received a make-over for

here such as the Acropolis, Parthenon,

Temple of Poseidon and Athena, Odeon

Herodus of Atticus and the Theatre of

EPHESUS in Turkey (from Kusadasi) is

the Turkish equivalent of Pompeii - well

known for the Temple of Artemis, one of

the seven wonders of the ancient world

and is a popular tourist destination.

There is also the opportunity to relax on

the beach, snorkel and for thrill seekers -

RHODES is part of the Dodecanese

chain of islands and situated close to

the Turkish coast. Rhodes is the largest

of this twelve island chain where the

Colossus is once said to have stood

straddling Mandraki Harbour next to the

last bastion of the crusades.

SANTORINI is a photographer's

paradise and the most popular port of

call on any cruise itinerary. This volcanic

island is made up of a crescent shaped

Caldera which is the edge of an ancient

this was the site of the lost city of Atlantis

- when the volcano erupted the centre

of this island disappeared into the sea

leaving the remnant known as Santorini.

MYKONOS (part of the Cyclades chain

of Islands) is also frequently visited

by many cruise ships for its Greek

atmosphere - plus there are some

NAPLES. Most people head for the

ancient Roman ruins of Pompeii and

Herculaneum or scoot across the bay to

the island of Capri.