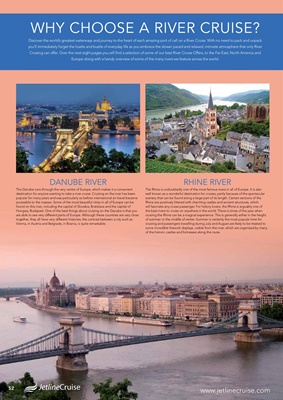 The Danube runs through the very centre of Europe, which makes it a convenient

destination for anyone wanting to take a river cruise. Cruising on the river has been

accessible to the masses. Some of the most beautiful cities in all of Europe can be

Hungary, Budapest. One of the best things about cruising on the Danube is that you

are able to see very different parts of Europe. Although these countries are very close

together, they all have very different histories; the contrast between a city such as

Vienna, in Austria and Belgrade, in Bosnia, is quite remarkable.

WHY CHOOSE A RIVER CRUISE?

Discover the world's greatest waterways and journey to the heart of each amazing port of call on a River Cruise. With no need to pack and unpack

you'll immediately forget the hustle and bustle of everyday life as you embrace the slower paced and relaxed, intimate atmosphere that only River

Cruising can offer. Over the next eight pages you will find a selection of some of our best River Cruise Offers, to the Far East, North America and

Europe along with a handy overview of some of the many rivers we feature across the world.

The Rhine is undoubtedly one of the most famous rivers in all of Europe. It is also

well known as a wonderful destination for cruises, partly because of the spectacular

scenery that can be found along a large part of its length. Certain sections of the

Rhine are positively littered with charming castles and ancient structures, which

will fascinate any cruise passenger. For history lovers, the Rhine is arguably one of

the best rivers to cruise on anywhere in the world. There is times of the year when

cruising the Rhine can be a magical experience. This is generally either in the height

of summer or the middle of winter. Summer is certainly the most popular time for

some incredible firework displays, visible from the river, which are organised by many

of the historic castles and fortresses along the route.