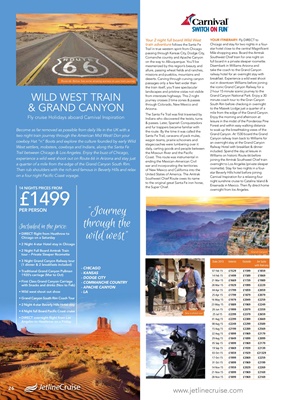 Your 2 night full board Wild West

on the way to Albuquerque. You'll be

mesmerized by this region's beauty and

missions and pueblos, mountains and

passages only a few feet wider than

the train itself, you'll see spectacular

landscapes and pristine vistas not visible

from interstate highways. This 2 night

through Colorado, New Mexico and

The Santa Fe Trail was first traversed by

Indians who discovered the twists, turns

and fur trappers became familiar with

the route. By the time it was called the

stagecoaches were lumbering over it

daily, carting goods and people between

the Missouri River and the Pacific

Coast. This route was instrumental in

war and incorporating the territories

of New Mexico and California into the

United States of America. The Amtrak

West settlers, mobsters, cowboys and Indians, along the Santa Fe

Trail between Chicago & Los Angeles. Enjoy the buzz of Chicago,

a quarter of a mile from the edge of the Grand Canyon South Rim.

YOUR ITINERARY: Fly DIRECT to

Mile shopping area. Board the Amtrak

Southwest Chief train for one night on

full board in a private sleeper roomette.

Disembark in Williams Arizona and

take the coach to the Grand Canyon

railway hotel for an overnight stay with

out in downtown Williams before joining

the iconic Grand Canyon Railway for a

2 hour 15 minute scenic journey to the

South Rim before checking in overnight

to the Maswik Lodge just a quarter of a

mile from the edge of the Grand Canyon.

Enjoy the morning and afternoon at

leisure in the midst of the Ponderosa Pine

Forest and within easy walking distance

to soak up the breathtaking views of the

Grand Canyon. At 1530 board the Grand

Canyon railway train back to Williams for

an overnight stay at the Grand Canyon

included. Spend the day at leisure in

Williams on historic Route 66 before

roomette). Stay for two nights in a fourstar Beverly Hills hotel before

Carnival Inspiration for a relaxing four

• DiRECt flight from Heathrow to

Chicago on a Saturday

with Snacks and drinks (Nov to Feb)

Angeles to Heathrow on a Friday.

Route 66. Below: See some amazing scenery on your train journey

See a shoot out